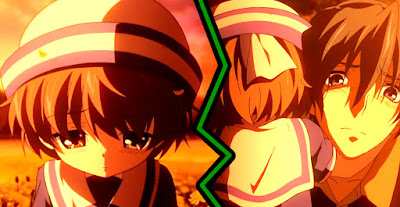 Clannad: After Story actually has a few scenes that I could choose from for this challenge.

When it comes to leaving an emotional impact, there are not a lot of anime series that do it better than Clannad and Clannad: After Story. I'm a sucker for sad stories and while most people are participating in "Try Not To Laugh" challenges, I tend to seek out "Try Not To Cry" challenges. Besides being a beautiful love story about friendship and family, Clannad: After Story never fails to heart my heart and bring me to the brink of tears.

If you've never seen Clannad at all and you want to experience the feels fresh, I suggest you stop reading and find a place to watch the series and then come back.

There are actually two scenes in Clannad: After Story that really hit me hard, but the one scene that first came to mind was when Ushio was finally able to cry in her father's arms. After the death of his wife, Tomoya Okazaki went into a depression and secluded himself from the world, neglecting his daughter and leaving her to be raised by her grandparents.

Ushio essentially grew up without a father even though Tomoya was around. They both knew about each other but instead of having the typical and loving father-daughter relationship, they were like strangers to each other. In this scene, Ushio finally had the father that she had always wanted and Tomoya was hit with the realization of how he had hurt his daughter by wallowing in his sadness.

While this is an incredibly beautiful scene because it is about a family reunited, it is also painful and saddening because you realize with Tomoya that even though he was justifiably broken, he was failing to care for the little girl who needed him. It is a powerful scene and I watch it whenever I want some raw and strong feels.