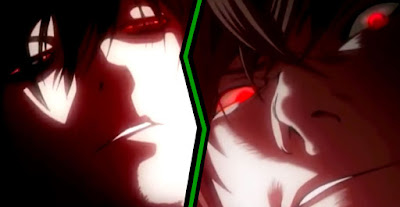 I couldn't believe it the first time I saw it...

If you have not watched Death Note and you somehow have not been spoiled at all, I suggest you stop reading right now and spend the next couple days watching it. If you're still reading, I'm guessing that you either finished watching Death Note or you don't really care about spoilers.

Like with most of the topics in this challenge, I had a lot of options to choose from and I had to actually think about what exactly the challenge was asking from me in order to provide the most appropriate answer. According to good ol' Google, one of the definitions of "epic" is "relating to or characteristic of an epic or epics" and "particularly impressive or remarkable". So the one moment in anime that stood out to me as characteristic of an epic and that was definitely remarkable was from the 25th episode of Death Note...the death of L and the victory of Light.

One of the reasons why I was so invested in Death Note was because the protagonist of the series, Light Yagami, was a villain. Sure, I think there are plenty of arguments that say Light is more of an anti-hero, but I think that it is fair to say that Light commits plenty of crimes that make the "villain" label more than appropriate. Anyway, I really like stories that are about villains, since it is scary to see how far they are willing to go to achieve their goals and even scarier that their ideology makes some sense.

But even though Death Note was about the bad guy, I still expected the good guy to triumph in the end, just like in most movies and comic books. In this case, the genius detective L fills the role of the good guy, and even though I enjoyed the mind clashes of L and Light, I could not wait for L to discover that Light was the mass murderer Kira and win...but that did not happen!

Still in the middle of the series, right when L is about to prove that Light Yagami has been Kira since the beginning, Light pulls off a brilliant schemes, outsmarts L, and has the shinigami Rem kill L. That moment where L dies of a heart attack was so dramatic and shocking that I probably would have cried if not for the very next moment to be Light smiling triumphantly over the dying L. Despite being furious at Light for murdering such a cool character like L, it was still impressive to see how Light could orchestrate the death of his rival at the last moment before he was found out.
Posted by AJ at 8:00 AM