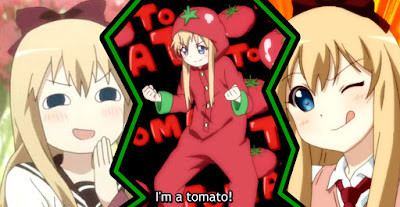 Shounen anime, shoujo anime, mystery, drama...whenever I watch these kind of anime, I can't binge watch more than two or three episodes before I get bored and want to watch something else. However I can watch comedy anime for hours, laughing until I'm in tears, and goofy characters usually help make these series great. Azumanga Daioh, Nichijou, Daily Lives of High School Boys...which anime and which character to choose for this challenge? There was only one choice that made the most sense to me, and that choice is Toshino Kyoko from Yuru Yuri!

Toshino Kyoko is an eccentric otaku and the founder of her school's amusement club. She loves the attention of her friends, brings up some of the most random topics, and she never fails to make me laugh. Her facial expressions and reactions alone are enough to make me laugh. Toshino Kyoko is one of those characters who would probably be tiresome if they existed in real life, but still someone you would like to have as a friend.

There may be times when Toshino Kyoko seems dimwitted...which she might be...but she is a talented doujinshi artist, a true friend to anyone she meets, and is willing to offer her favorite rum raisen ice cream to anyone who needs it more. If you're looking for a reason to watch Yuru Yuri, Toshino Kyoko is just one reason to check out an episode or two.