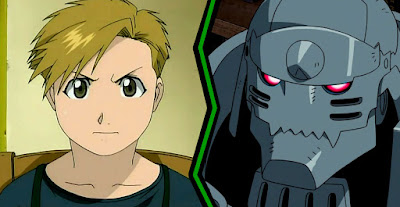 "Humankind cannot gain anything without first giving something in return. To obtain, something of equal value must be lost...

"...That is alchemy's first law of Equivalent Exchange. In those days, we really believed that to be the world's one, and only truth." That is how almost every episode of Fullmetal Alchemist would start and it. Those words by Alphonse Elric set the tone of the show and told me a lot about the philosophy of the Elric brothers.

Not only did that quote tell me that the Elric's believed that in order to gain something, a price must be paid, it tells me that they had tried to gain something great in order to have lost what they did; in Edward's case, an arm and leg, and in Alphonse's case, his entire body. But the quote also says that the law of Equivalent Exchange is not entirely true and that sometimes paying a high cost does not bring a grand result. With the Elric brothers, their payment brought them more hardships and pain.

This quote from Alphonse Elric echo in my head whenever I think about Fullmetal Alchemist and though I did not fully grasp the meaning behind the words when I first started watching the show, they have an ominous meaning to me now.