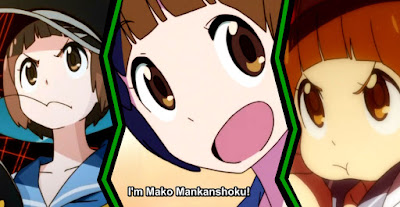 Like with Rider, it was not easy to choose just one character. But when I finally made my pick, I realized that it could not have been anyone else, and that is why I have chosen Mako Mankanshoku from Kill la Kill as my favorite supporting female anime character!

I think that Mako is one of the best of friends that a person can ask for and in Kill la Kill, Mako is always willing and ready to lend a hand to Ryuko whenever needed...and even times when Ryuko is facing a challenge that is beyond Mako's abilities, Mako is at least ready to deliver a dramatic and motivating speech. And if she really has to, Mako has her own two-star Goku uniform that will give her the strength to take on the scariest bad guys.

Some might find Mako's energetic and cartoon-y cheerfulness annoying and tiring, but I find Mako's over-the-top personality endearing. Mako is without ill-will and is able to find joy in the simplest things in life. Even  though Ryuko Matoi is the main character of Kill la Kill, I think Mako Mankanshoku is a good role model for anyone looking to have a more positive outlook on life by taking on any challenge with a smile.
Posted by AJ at 8:00 AM