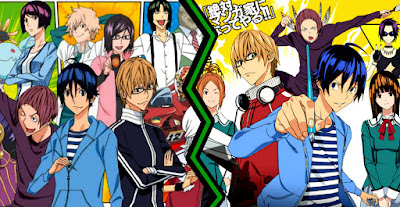 Whenever I need some motivation, Bakuman always helps!

Bakuman is about high school students Moritaka Mashiro and Akito Takagi and their mission to write a popular manga that will be made into an anime. As a shounen series, Bakuman makes the duo's writing and drawing as exciting as any battle in Dragon Ball or Naruto and the dedication of Mashiro and Takagi to be great mangakas is inspiring to an aspiring writer like me.

In my freshman year of college, I remember telling almost everyone that I met that I was studying and working toward becoming one of the most popular comic book writers in the world. I said it so often that my friend suggested that I watch Bakuman. Ever since, I watch Bakuman whenever I need a reminder of my goals and that if I want my dreams to come true, I need to put in the hard work.

Though my goals have changed from being a famous comic book writer to becoming an influential writer and content creator, I still try to match the work ethic of Mashiro and Takagi. Though they represent the ultimate example of great manga writers and artists and work themselves into exhaustion and near-death, they are still encouraging characters that keep me going whenever I get tired of writing.