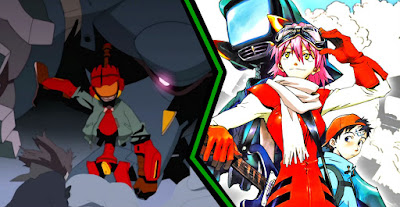 According to MyAnimeList, FLCL is a mecha anime!

I really don't watch a lot of mecha anime and I have never seen a Gundam series. I am in the middle of watching Gurren Laggen and I will probably try watching a Gundam series sometime in the near future, but for now there is only one mecha series that I have watched, and that series is FLCL also known as Fooly Cooly.

According to Wikipedia, a mecha anime is a series that "centers on robots or machines controlled by people" and FLCL fits that description. The robot known as Canti comes out of the head of the main character and fights other robots and mechanical monsters. I already wrote a recommendation about FLCL which you can read here.

Besides being a trippy series with an awesome soundtrack from the Pillows, FLCL has awesome fight scenes between moderately-sized and giant robots. You would think that a fight between machines would be slow with awkward and clunky movements as metal fists smash into each other, but FLCL showcases fluid and fast-paced fights that rival most battle and fighting anime.

Even though I'm naming FLCL as my favorite mecha anime, I didn't really watch it for all of the robots. The biggest appeal of FLCL is the outlandish and random storyline that is definitely confusing throughout the first and second time watching the series. Without the robots, FLCL would probably be just as strange as it is now, but the robots definitely provide another element to enjoy.