30 Day Anime Challenge - Moment That Shocked Me The Most 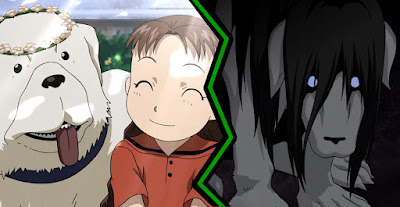 I named Dragon Ball Z and Pokemon as being the first anime that I ever watched, and even though that it true, the first anime that I watched that made me into an otaku was the original Fullmetal Alchemist. When I first started watching Fullmetal Alchemist, I really wasn't sure what I was supposed to expect. Within just the first few episodes it seemed like the show was about the adventures of two brothers searching for the Philosopher's Stone.

In the sixth episode of Fullmetal Alchemist, the Elric brothers were staying with the Sewing-Life Alchemist, Shou Tucker and his daughter Nina and their dog, Alexander. After what Ed and Al Elric lost to become alchemists, seeing them with Nina was like they had finally found the family that they had lost. I was completely ready to watch the adventures of Ed, Al, and Nina...until the seventh episode of Fullmetal Alchemist.

In order to keep his alchemy license, Shou Tucker transmuted Nina and Alexander into a talking chimera, and like Ed and Al, I was in complete shock. I just couldn't believe that what seemed like was going to be a heartfelt story about finding family ended up being such a horror show. That moment gave me an idea of the kind of shocking storylines that I could expect from anime.