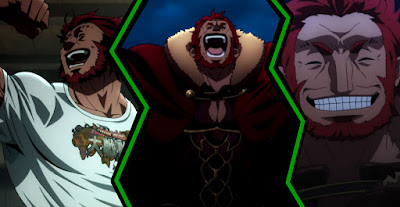 He may be the legendary King of Conquerors, but he's also one of the best bros!

There are so many anime characters that I could have named for this challenge. Anime has such an assortment of three-dimensional and interesting characters, and even two-dimensional who are still pretty interesting. Choosing a favorite supporting male anime character took some thinking, especially since there were some characters who, even though they support the main characters, the anime goes enough into their backstory that it could be argued that they are a main character. In the end, I have finally decided to choose Rider, or Iskandar, from Fate/Zero.

Chosen to be Waver Velvet's Rider-class servant in the Holy Grail War, Iskandar is known better as the legendary Alexander the Great. The reason that I chose Rider to be my favorite male supporting character is because he is not just one of my favorite characters from Fate/Zero (which I am still hyped up on) but as a servant, he seems to do his job the best in helping his master fight in the Holy Grail War.

Despite being literally larger than life, Rider never demeans or challenges his master, but instead encourages Waver and helps realize what it really means to be a conqueror. While the other heroic spirits are either cold and pretentious or righteous and conflicted, Rider is boisterous and warm. Even though his wish is to reconquer the world and take what he wants, it's almost easy to forgive him when he has such a friendly grin and infectious laugh.