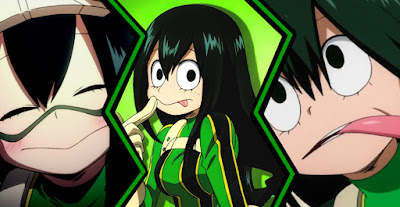 Just look at those eyes! How could I resist those big frog eyes!?

Like a lot of otaku, I have fallen in love with a long list of anime girls. It's just something that happens, especially when artists and animators intentionally make their characters look as adorable as possible. That is why it took me so long to choose just one character for my anime crush and I came to the realization that Tsuyu Asui from My Hero Academia is my anime crush.

Besides being a great anime, My Hero Academia is well-known for having the best "best girls" since not only are they all some of the cutest girls in anime, they are also well written and unique characters and most of them are pretty three-dimensional.

So out of girls like Ochaco, Momo, and Mina, why did I choose Tsuyu Asui as my anime crush? I guess you can say that it was love at first sight. Her long dark hair and big round eyes immediately captured my heart, and when she wears that skintight green costume, I just can't resist her charms.

Of course Tsuyu is just another pretty face. In the first season of My Hero Academia, Tsuyu proved herself to be one of the best characters by taking both a position of leadership and positive support when UA high school was attacked by the League of Villains. Ever since then, Tsuyu has shown that she has the spirit of a hero and is a true friend to those around her.

There are some guys who like cat girls and others who are into bunny girls, and with series like Miss Kobayashi's Dragon Maid, there are guys who love dragon girls. But me...I'm in love with a frog girl.