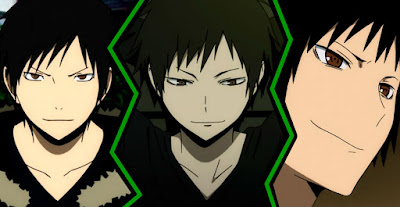 I don't know if he's really a villain...but he's definitely not a good guy!

Durarara!! is one of my favorite anime series because of its unique and complicated characters and lack of a single protagonist and antagonist. None of the characters were really evil, just perverted or lost...except for Izaya Orihara.

Izaya Orihara may seem harmless if not a bit eccentric, but he is probably one of the most dangerous sociopaths you'd ever meet. He doesn't really love anyone but he does love humanity as a whole. Except his love is not selfless or particularly affectionate. Izaya is interested in watching how people interact and undergo conflicts. There is almost no secret that Izaya doesn't know about and he is behind almost every misfortune in the city of Ikebukuro.

But he's not a casual observer who just sits back and lets everyone go about their day, to Izaya, people are like play things for him to manipulate and antagonize for his entertainment. And if someone ever starts to bore him, Izaya will just cast them aside and no longer bother with them.

Even though he makes enemies out of almost everyone he meets, Izaya is not really interested in keeping up with feuds. The only reason why he continues to harass people like Shizuo Heiwajima, the strongest man in Ikebukuro, is because Izaya thinks that it's fun.

Izaya Orihara has the heart of a child and the mind of a criminal mastermind with no regard for who will be hurt by his schemes. He thinks that he's a god and that he doesn't have to pay for his crimes, no matter how many times his games end with him getting punched in the face or stabbed in the gut.