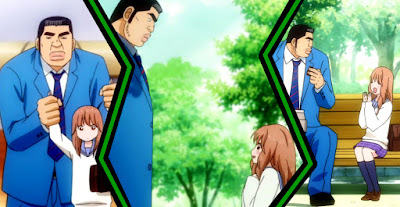 Takeo and Yamato...They are the purest of hearts and they deserve each other!

I was talking to a friend the other day and he mentioned how there are not a whole lot of couples in anime or there are not a lot of anime couples that are really well-developed since most anime series end when two characters finally become a couple. Ore Monogatari!! is a comedy series that actually has the two main characters become a couple in just the first few episodes and then explores their relationship as the series progresses.

Takeo Gouda is an intimating and bulky high school freshman who is not particularly popular with the ladies even though he is probably one of the nicest guys in anime. Rinko Yamato is a cute girl who is just a little timid. Takeo meets Rinko after he rescues her from a molester, and Rinko immediately falls in love with him, though both assume that the other is too good for the other.

Based on physical appearance, you would assume that Takeo and Rinko are an example of "opposites attract". Takeo is a giant with brutish features and Rinko is petite and adorable like a doll, but both are pure-hearted and innocent. They are both genuinely good people who are dedicated to their friends and especially loyal to one another. No matter what misunderstanding or conflict comes between them, their love for one another always wins in the end.

I do not think there is any disagreement that Takeo and Rinko are perfect for each other and that is one of the reasons why they are my favorite anime couple. Even though I would normally enjoy watching a tragic couple that is doomed from the start, Takeo and Rinko's perfect relationship is too sweet that I can't hate it. They are the definition of relationship goals!