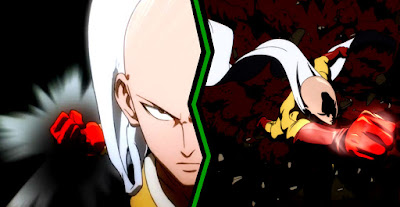 Even though Saitama's punch doesn't have a cool name like Goku's "Kamehameha", I think the ridiculous power of the punch makes it one of my favorites. Sure Saitama's ability makes him one of the most overpowered characters in anime, One Punch Man is one of the most entertaining anime from recent years and whenever it's time for Saitama to take on some kind of giant monster, I can't help but smile.

I really don't know what else I can say about Saitama's punch since really all anyone needs to know about it is that no one has been able to take a hit and survive. From an army of mole people, to a giant fish king, to an alien warlord, no one can resist the power of Saitama's one punch.

I'll probably write a recommendation for One Punch Man sometime in the future, but for anyone who might think that a show about a superhero who can't be beat gets old really fast, I just want to say that it really doesn't. One Punch Man is full of great action and animation and has some of the best comedic moments that rival Marvel.