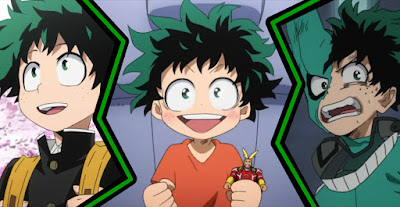 He's on his way to become one of the world's greatest heroes!

You may have figured it out from my My Hero Academia recommendation, but Izuku Midoriya, also known as Deku, is one of my favorite characters from recent anime. He may even be my favorite fictional character of all time!

Ever since the first episode of My Hero Academia I really liked Deku and wanted to see him achieve his goals more than any other fictional character. Why? Because he reminds me of my own childhood dreams. Like a lot of people, I had seemingly unbelievable dreams and visions for myself. Growing up watching superhero cartoons, movies, and comic books, I remember that I wanted nothing more than to become a superhero. Specifically, I really wanted to grow up to become a Power Ranger since they seemed like super-powered cops with colorful outfits. But I grew up and decided to move on from such an impossible dream and try to become a popular writer...yeah, 'cause that's definitely more realistic.

Watching Deku as a child cry because he realized that his dreams were impossible almost brought a tear to my eye, and seeing Deku get the opportunity to become a great hero gave me a tinge of pride for my new green-haired son. Yes, I just referred to an anime character as my green-haired son since every time I watch an episode of My Hero Academia I can't help but feel joy when I see Deku win or heartbroken when he loses.

I cannot find any faults in Deku even if I tried. Sure, he cries a lot, which is a trait that tends to annoy me in most fictional characters, but with Deku I can't help but feel sorry for him or proud that he has such a big heart. He's such a pure soul with a heroic spirit that I wish nothing more than for him to have a happy ending when My Hero Academia reaches its eventual end. Which is saying something since I really like stories that end in tragedies where the hero is either broken or dead...but not for Deku. I want him to live his dream and become a hero that can rival mainstream superheroes like Superman and Spider-Man.