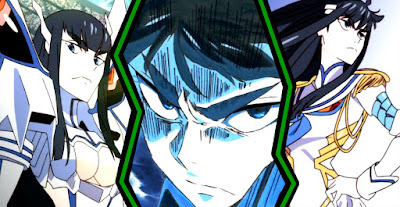 Fear is freedom! Subjugation is liberation! Contradiction is truth!

I was originally going to pick Ryuko Matoi, the protagonist of Kill la Kill, as my favorite female anime character...but then I remembered Ryuko's rival and one of the main antagonists of Kill la Kill, Lady Satsuki Kiryuin!

I was thinking that I could probably name Satsuki as being one of my favorite anime villains, but I really wouldn't call her a villain or evil. Sure, she stands in the way of Ryuko Matoi, but not out of malice, but to further her own agenda. To me, Satsuki Kiryuin is a noble leader and an unstoppable conqueror.

From the first time she appeared on screen, Satsuki Kiryuin radiated power and elegance with her commands to the students of Honnouji academy. She ruled with an iron fist and showed no fear when confronted by any opponent or threat, and she shows no fear since there is barely anything that scares her or makes her feel uneasy.

And why should she feel fear? Satsuki Kiryuin is a skilled and deadly fighter capable of defeating and humiliating hordes of opponents...and that's without her Kamui, Junketsu. With Junketsu, Satsuki is a force to be reckoned with, swiftly cutting through her opponents with her blade like they are nothing.

Along with her physical abilities, Satsuki is a brilliant tactician capable of thinking several steps ahead of her enemies. Anyone who challenge her quickly fall into the web of her schemes or unknowingly do her bidding. If any are somehow capable of defeating Satsuki and strip her of clothing and weapons, Satsuki is still capable of coming out on top with quick thinking and preparing a plan that will help her escape.