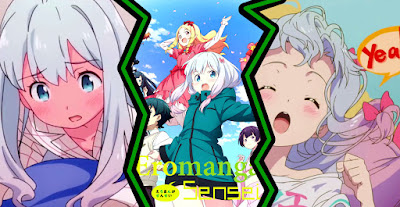 If you have never heard of Eromanga-sensei and you're wondering why I'm making such a big deal about it, than let me share with you the horror that is Eromanga-sensei. The show follows Masamune Izumi, a high school student and light novel writer, when he discovers that his NEET little sister (technically step-sister), Sagiri Izumi, is the artist who provides lewd illustrations for his light novels, the mysterious Eromanga-sensei.

Upon discovering that his loli of a sister is the popular Eromanga-sensei, Masamune tries his best write a light novel worthy of Sagiri's art and to encourage her to come out of her room. Sagiri is obviously in love with Masamune and there is constant romantic tension between the two of them, as well as some very R-rated situations.

Yeah, there are a lot of scandalous moments throughout the series that no one would want to be walked in on watching. If this wasn't animated, it would probably be illegal. It's just...it's so very wrong.

So why did I watch it?

I guess the reason I started watching Eromanga-sensei is because I heard about who trashy and depraved the show was, and I wanted to see if the rumors were true...which they were. There were also a couple moments that were just so dumb that I couldn't help but laugh. In the end though, it wasn't really a good show and if it wasn't for the memes, I probably would have dropped this piece of trash after the first episode.