30 Day Anime Challenge - Anime Character That Gets On My Nerves 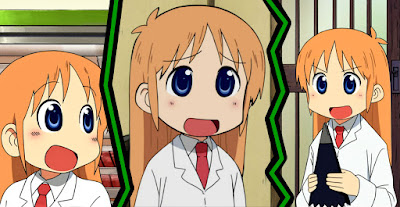 She can be so cruel to Nano at times...

Hakase is a ten-year old scientist and one of the main characters of Nichijou, and I want to make it clear that I do not hate her character. There are many moments where her antics and jokes on Sakamoto really make me smile or burst out laughing. But there are also times when she can get a bit tiring and sometimes she just ticks me off.

As a ten-year old, Hakase can sometimes be a bit selfish and too carefree, and sometimes her childish tantrums get to be too much for me to handle. Sure, Hakase is cute and has some of the best comedic scenes, but that doesn't change the fact that she also gets on my nerves. Hakase can easily become as much of an annoyance as she can be a joy. Maybe I'm being unfair since Hakase is a ten-year old girl and the fact that she annoys me might just a sign that I am not ready to deal with children. I don't know why, I just know that Hakase from Nichijou just really gets on my nerves.
Posted by AJ at 8:00 AM