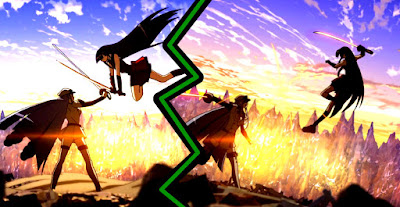 I will probably write a review/recommendation for Akame ga Kill eventually, but I do want to address how the series does have some issues with pacing and sometimes kills off characters without giving the audience a reason to care about them. Even in this fight, there is some evidence that Esdeath is a sympathetic villain but not enough to really root for her.

On the other hand, there is Akame, who you would think would be the protagonist of a series called Akame ga Kill, who is actually just a really cool supporting character. The series does go into Akame's backstory so we know the reason why she is fighting and what she has lost to get to this point, I just wish the same had been done with Esdeath.

But despite these flaws, Akame ga Kill is an anime that I call a favorite solely for the reason of how much I enjoyed watching it. Almost every fight in Akame ga Kill ended in the death of at least one character, so with this clash of titans I was not sure who would die. Both characters are seemingly equal in strength and skill, and on the surface they both seem to be just as merciless. Animated beautifully and keeping me in suspense, I think that Akame versus Esdeath is one of those fights that showcase the intensity and beauty that you can only create through animation.

And I just can't resist a good sword fight.