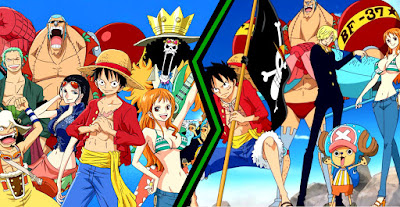 It's one of the longest running anime series...and I still haven't watched one episode!

Among shounen anime there is a group of series known as the "Big Three" because they are some of the popular series that are more or less representative of the genre. The Big Three are Naruto, Bleach, and One Piece. I've watched about a dozen episodes of Naruto and am familiar enough with the series to be able to provide someone with a summary of the series and Bleach is a series that I am currently watching and actually enjoy. But I have never watched One Piece  and I don't know when I'll start.

In the anime community, there are a few shows that almost everyone has seen or at least knows enough about to engage in conversations regarding story arcs and characters. I haven't completed or have barely started popular anime like Steins;Gate, Hunter x Hunter, and Code Geass, but I still know enough about the series to follow a conversation regarding each respective series. I can't really say the same for One Piece.

But with One Piece being such a popular anime, why haven't I watched it? Well, with there being over 800 episodes of One Piece out there, I'm a little intimidated to start. Of course, I don't need to watch all 800 episodes in a day, but what if I actually like it? What if One Piece turns out to be really really good?! As an otaku, it is possible that I might be drawn into the adventures of Monkey D. Luffy and I'll end up sacrificing hours of my day binge watching One Piece on CrunchyRoll.

On a more realistic note, I'm just not really feeling an urge to watch One Piece. The art style, the characters, and the pirate theme, don't really scream at me to 'WATCH IT!!" It doesn't really appeal to me in the same way other shounen anime like Dragon Ball Z and Bleach. And I'm also not a huge shounen fan. I like drama and action, but I usually go to series like Death Note and Elfen Lied to feed my anime appetites. Boku no Hero Academia is one of the few shounen anime that I am especially passionate about and that's because...well, superheroes and things.

As of right now, I don't plan on watching One Piece, especially since I will soon have to manage my time and make some sacrifices in my anime schedule, but I will one day just find the time to sit back with a bottle of coke and a bag of potato chips and watch a few episodes. For now, I'll just enjoy PurpleEyesWTF's abridged series, None Piece.