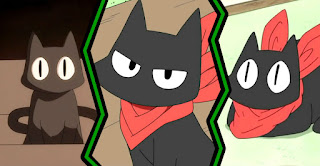 He may be an average cat, but he's one of the best characters in Nichijou.

Even though Nichijou translates to My Ordinary Life, the characters and a lot of the situations that they find themselves in are far from ordinary. Sakamoto is a perfect example of the how strange the cast of Nichijou can be.

Sakamoto was just an average cat who used to be the pet of a school science teacher until he ran away since the science teacher was really really bad at taking care of a cat. Sakamoto was found by Hakase, a ten-year old scientist, and Nano, a robot who looks like an ordinary school girl. Hakase gives Sakamoto a red scarf that gives him the ability to to talk.

Like most cats, Sakamoto sees himself as superior to his owners and tries to hold his maturity over the two girls that take care of him. Though because of his serious and adult demenour, he ends up being the victim of Hakase's pranks and schemes, and because he's the cat, Hakase tends to blame Sakamoto for most of her mischief.

Even though Sakamoto is a talking cat, Sakamoto might be the most normal character in Nichijou, and that just makes the absurdity in the anime so much funnier seeing how much misfortune it causes the uptight Sakamoto.
Posted by AJ at 8:00 AM