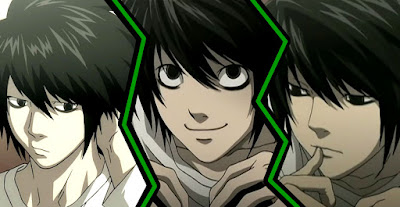 Socially awkward, sits in front of his laptop in a dark room, enjoys sweets...

L from Death Note is definitely a fan favorite among otaku and the anime community and he is one of my favorite but I also relate to a lot of his mannerisms and his personality. Though I will admit that I do not possess his genius-level intellect and his career as a mysterious detective and I doubt I'm ever going to find myself in his position since I'm just an English major who writes about anime and comic books on the internet.

So, what is it about L that I relate to? There is actually a lot about his appearance and my own that is very similar with just a few significant differences that make us unique. We both have a head of messy black hair, though I think my hair is a lot longer than L's and his is in that typical anime style.We also both look exhausted. L has his dark bags under his eyes and I tend to fall asleep during long lectures if I don't drink enough caffeine.

There is also a lot of similarities with our personalities and habits, like our favorite snacks. I don't really snack a whole lot but if there is one thing that I like to eat while I'm writing or watching anime, it would probably be something like cookies or candy. And usually whenever I am working and enjoying sweets, I tend to do it in the darkness of my room on my laptop, much like L when he is first shown in Death Note.

L is one of those anime characters that I admire and wish that I could be more like in my daily life. There are sometimes when I am just lounging around and I try out some of L's small habits like the way he sits on chairs or the way he brushes his lip with his thumb. L is also one of the few characters that I tried to cosplay and I think that I was actually able to pull off his messy emo look.