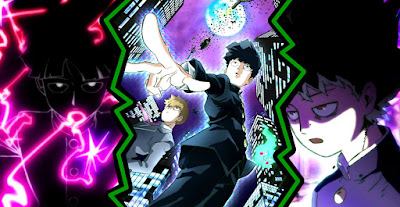 This one is a little bit late, but not because it was a difficult decision, but because school and stuff got in the way. Out of all the anime that I have seen (Which isn't a lot compared to other fans who have been watching anime since birth) I think that Mob Psycho 100 had some of the most beautiful and incredible animation from beginning to end.

While Mob Psycho 100 really didn't do much to impress me when I first saw the art and I thought that the first episode was just alright, the action scenes were really something to behold. Now while I think that One Punch Man, the spiritual predecessor to Mob Psycho 100, had just as impressive animation, I think that the contrast between the strange art style and dynamic animation really is something special and worth highlighting.

Mob Psycho 100 easily goes from zero to sixty, or should I say, zero to one hundred in almost an instant. There are a lot of anime that are beautifully animated from beginning to end or have awkward moments between breath-taking scenes, but Mob Psycho 100 is misleadingly plain and delivers intense and epic action scenes.