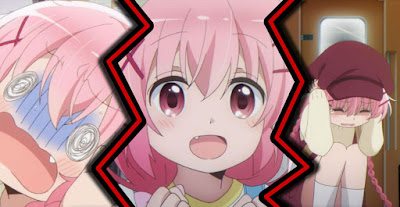 She's a pink ball of joy and anxiety that's just trying to do her best.

I love writing. When I decided to study English in college, it was because I wanted to improve my writing so I could one day become a comic book writer. The main reason I continue to write blog posts is because I love writing and I would love to make a living off of writing about things like anime. That is why I enjoyed the anime Comic Girls and got really attached to the main character, Kaoruko Moeta.

She's a pink-haired loli with a single fang and a nervous demeanor. She is very moe and I have a soft spot for moe characters. Her name is literally Kaoruko MOEta. When I decided that I would be highlighting some of my favorite anime characters of 2018 for the 12 Days of Anime, I knew that I was going to end up writing about Kaoruko.

So besides her moe appearance, why was I especially fond for Kaoruko when the rest of the Comic Girls cast is arguably just as adorable? Like with Yuzuki from A Place Further than the Universe, I feel like I can relate to Kaoruko.

Kaoruko is a young up-and-coming manga artist who is trying to publish a sweet slice-of-life 4-koma series but all of her manuscripts get turned down. She is harder on herself than others. She is always prepared to fail and even refers to herself as a "side character" even thought she's the main character of Comic Girls. But she never puts that negativity onto her friends. She always cheers them on and is always praising their manga and art.

As a writer, I always have a hard time judging my own work, and I really hate rereading something that I wrote. A lot of the time, I think that my own writing is awful and I'm always surprised when someone actually enjoys something that I thought should be scrapped and thrown away. I may not cry and start shaking like Kaoruko, but I sometimes feel like breaking out into her signature "ababababa" cry.

I have also surrounded myself with friends who are also writers and artists. Some of them pursuing careers in their craft. I'm not sure how they feel about their own work, but I am always amazed by the things that they create and I can't wait to see what they go onto do with their art. I am almost content to be a "side character" in their journey.

Not only have I found a kindred spirit in Kaoruko Moeta, but I also see her as an inspiration. She's a character who I want to be more like as a writer. No matter how many times she fails and no matter how bad she talks down to herself, she doesn't give up on manga. Kaoruko continues to pursue her dreams and works harder after every failure. So even though she may see herself as a "side character" or way out of her depth, I want to be a writer with the heart and spirit of Kaoruko Moeta from Comic Girls