12 Days of Anime - Katsuki Bakugou from My Hero Academia 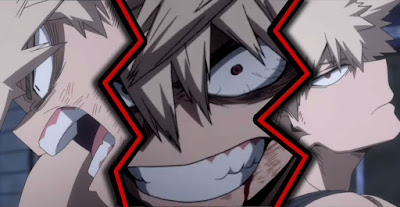 My Hero Academia has a great cast of characters, so it's a little unfair to write a post about Katsuki Bakugou for my 12 Days of Anime. My Hero Academia is so popular and hyped up that it's not a series that needs anymore attention. I actually wanted to avoid writing about characters from series that didn't debut in 2018...but I felt like Katsuki "Kacchan" Bakugou made such an impact on me and the anime community this year that it would be a disservice not to bring him up during the 12 Days of Anime.

When I first started watching My Hero Academia back in 2016, I really did not like Bakugou. He was a cruel bully and I thought that he quickly fall away from the path towards heroism for a life of evil and villainy. So in the third season of My Hero Academia, after the League of Villains kidnap Bakugou to try and convert him towards their side, I once might have thought he would take their offer and become a dangerous foe to main character Deku. The key word there is "might".

Watching the series, it becomes apparent that Bakugou is not a dumb evil brute. Growing up and in middle school, he was always being praised and believed that he could become the strongest hero ever. Which is why Bakugou resented Deku for "looking down on him", when really Deku just really cared for Bakugou, who Deku also thought was cool and capable of great and heroic things.

Among Class 1A, Bakugou is not the strongest and not the most talented student. He is competing with students who are just as powerful or even more powerful than him in different aspects. In that setting it is revealed that Bakugou is just an awkward teenager who doesn't know how to interact with others and express himself without shouting or making empty threats. He is like a dog whose bark is worse than his bite.

In this latest season of My Hero Academia, Bakugou proves that despite his cruel words and violent nature, he is more of a hero that a villain, if he is even a villain at all. He is determined to achieve his goals and has found friends that he can count on to have his back in a fight. He also proves to be kind of thoughtful or at least remorseful when others sacrifice themselves on his behalf.

While I relate more to a character like Deku than Bakugou, I still find him a very interesting character and probably one of my favorites of My Hero Academia. While season two of the series gave Todoroki and Iida a chance to show their true colors and grow as characters, I think that this latest season was really significant for Katsuki Bakugou...otherwise known as KING EXPLOSION MURDER!!
Posted by AJ at 7:00 AM