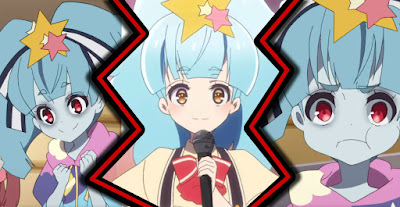 She is Lily (Or Shrimpy, according to Saki).


Beneath my tough and manly appearance, I'm actually very soft and weak to cute things. So when Zombie Land Saga came on the scene this Fall season, it wasn't hard for me to fall in love with the adorable Lily Hoshikawa. Although all of the Franchouchou girls are great, it was Lily who first stole my heart and it was the episode that focused on her backstory that nearly brought me to tears.

Like the rest of the girls of the idols group Franchouchou, Lily is a zombie. So even though Zombie Land Saga was a comedic idol anime, I had a feeling that the story behind Lily's death was going to be heart wrenching. Before being resurrected as a zombie, Lily was a child actress who got into acting because she wanted to do something that would make her TV-loving father smile.

Unfortunatly, the stress of being a star and her father becoming too focused on her career rather than her, took it's toll on Lily. When she started to grow facial hair, the fear of puberty and losing her cute feminine appearance hit her hard, and Lily died of mental shock. A daughter dying before fixing a strained relationship with her father was emotional and I wasn't prepared for that from a show about zombie idols.

Lily also stood out to me among all the other anime characters from this year for being an example of trans representation. Though their was some discourse in the anime community about whether or not Lily was actually a trans character, I think that it is obvious that she is a trans girl. While this causes some needless anger and disrespect from some in the anime community, it just makes me want to protect Lily's smile even more.

Her upbeat and sparkling personality make her a great member of Franchouchou. She has a smile that is just as bright as the star in her hair. Even though it is adorable when she pouts or cries, Lily is a sweet girl that will be protected by her fans and her idol big sister Saki.