12 Days of Anime: Popuko and Pipimi from Pop Team Epic 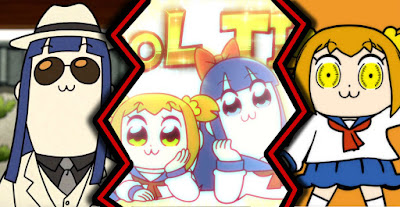 On their own, they're dangerous; together, they are a force to be reckoned with...

I intended for my "12 Days of Anime" posts to each focus on a single character, so I'm kinda cheating with this post. I actually planned to make this post about just one of the main characters from Pop Team Epic, but I realized that, apart, the power couple that makes up this show are weak without the other. That's what brought me to write a blog post about the enigmatic and terrible Popuko and Pipimi.

So what do I actually know about Popuko and Pipimi? I know that they are scary and that they are two of the most powerful anime characters ever to be created. They can appear and disappear at a moments notice. They can save lives and destroy them in the same instant. They can take many different forms. It is like they're not real or some kind of fictional charac--oh, right...

The two of them are also more than just a couple of cute and talented faces. They are also murder investigators at a hot spring. They are gangsters putting an end to rivals who commit YouTube crimes. They are horror monsters who prey on college students alone at a cabin in the woods. Popuko and Pipimi have a wide range of skill and interests. Nothing is impossible for the two of them.

That brings me to my final question: Why did I want to write about Popuko and Pipimi from Pop Team Epic for the "12 Days of Anime"? While these characters did not really reach something deep within me that made me reflect on my life, they did manage to capture my interest. It was the antics of these two characters that kept me coming back every week during the Winter season of 2018 just to see how much more further they would take their absurdity. No other character (or characters) that appeared this year baffled me like Popuko and Pipimi.