12 Days of Anime: Anzu from Hinamatsuri 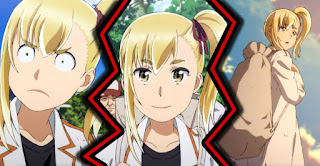 She does her best and she deserves the best.

What made Hinamatsuri one of the best anime of 2018 and one of my favorites, is not just that it was a funny comedy series that easily made me burst out into laughter, but it was also very touching and made me go "Aw, that's so sweet." just as much as it gave me a chuckle. The character who gave me that heartwarming feeling the most was a small blonde-haired ESPer named Anzu.

When Anzu was first introduced in the series, I remember being a little confused. I knew that this character was going to show up since she was pretty prominent during the opening theme. In the opening, Anzu looked like a cheerful and friendly girl who needed to be protected. In episode two, Anzu shows up in town searching for Hina and she seems to be Hina's rival. Anzu comes off as tough and rude with a chip on her shoulder. The lazy Hina seemed like an absolute angel compared to the trouble-making Anzu.

I didn't hate Anzu. I actually liked the dynamic between Hina and Anzu, but I wasn't prepared for such a contrast between the girl in the opening and the actual character. In the very next episode, I found out why the lawless character appeared like such an innocent little girl in the opening. While Hina was able to indulge in her lethargy because she lived with the yakuza Nitta, Anzu had no place to call home and no one to take care of her.

Anzu had to steal to eat and was always on the run from anyone she stole from in order to survive, until she was taken in by a camp of homeless people. While living in the camp, she learned compassion and the importance of hard work. Throughout the rest of the series, Anzu learned from the people who took care of her and she became someone who did her best to thank others and help them out. She went from being a dangerous rival to a friend everyone would want.