12 Days of Anime: Ayano from Hanebado! 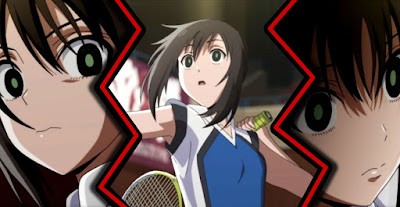 She's not very passionate about badminton. She's obsessed with it!

2018 is the year where I took more of an interest in sports anime. Something about the spirit of competition really gets me. Watching two teams, or individuals, work hard towards noble goals until their muscles ache and they're soaked with sweat is just so fun and captivating. That being said, the spirit of competition was not the reason why I enjoyed Hanebado! The reason I kept coming back to Hanebado! was the small badminton monster called Ayano Hanesaki.

Sure, she looks like a normal cute anime high school girl, but when she's on the court with a racket in her hand, Ayano destroys her opponents with ease. The first time I saw that look on her eyes, I couldn't help but smile at how fun it was to see her just dominate in the game of badminton. It was ridiculous how savage she could be toward her opponents and even those that called themselves her friends and teammates.

While I love Ayano Hanesaki as a character, I remember hating her a lot as well. Watching her talk smack toward her friends and look down on everyone around her constantly made me think, "I hope someone literally smacks some sense into her", almost every time she was on screen. But what made Ayano so competitive and fierce. From the beginning, it does not seem like she really loves badminton and only joins the badminton team after being dragged along by a friend.

Ayano is driven by spite, a motivation that I am sure many have found at one point or another. Abandoned by her badminton star of a mother for losing a match, Ayano plays badminton to win back her mother's affection again, just so she can angrily push her mother away. She her mother that Ayano has outgrown her.

Though motivated by such a toxic desire has dangerous consequences. Ayano not only defeats her opponents and rivals on her quest. She also pushes away those who were close to her and wanted to root for her to win. And Hanebado! is such an overly dramatic series that it becomes funny to see just how far Ayano will take her obsession to be a godly badminton player.

While I did not find Ayano to be a relatable character, I found her to be very interesting and it was fun to watch her throughout the series. I don't think the Summer season would have been as fun without the intensity of Ayano Hanesaki.
Posted by AJ at 7:00 AM