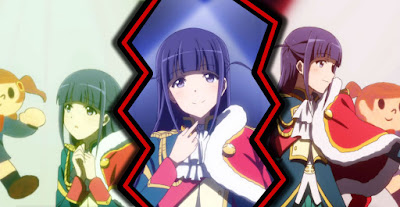 The star of the "Revue of Jealousy".

I've written before that Revue Starlight is a beautiful and strange anime. It's a series with sincere drama and deep themes, but it is also full of absurdity and fun. That blend of seriousness and eccentricity is what kept me coming back every week for more, and the character that I felt embodied those characteristics was Mahiru Tsuyuzaki.

While Revue Starlight has plenty of charming girls that are easy to love, I am really drawn to Mahiru. When she first shows up, Mahiru is in love with her roommate Karen and does everything that she can to take care of Karen and earn her affection. To Mahiru, Karen is a star that shines brightly and Marhiru wants to continue to see her shine.

Mahiru does not see herself as a star. She limits herself and believes her only use is to help Karen. So when Karen grows closer to childhood friend Hikari Kagura and become more independent of Mahiru, she is afraid of losing her star and desperately wishes Karen would return to her.

That leads Mahiru to the "Revue of Jealousy" where she has to fight Karen in a baseball-themed musical number in an attempt to get her shining star back. She lets out her frustration on Karen, admitting to being jealous of Hikari and that she wants Karen to lean on her again. In her duel with Karen, Mahiru is shown that she doesn't need someone to rely on her to be relevant. Mahiru proves to be a performer who is just as talented as the other girls. She can shine on her own.

"Is Shine Even Possible?", the episode that focused on Mahiru, was one of my favorites because it was so ridiculously fun and had something very important to say through Mahiru. It was a message that really spoke to me, and it likely resonated with other artists and creatives.

There are many times where I feel like I am not talented enough and that I should abandon my creative pursuits. I feel content in being someone who just supports others while never pursuing anything for myself. Mahiru is a reminder that anyone can shine when they put in the effort and that they shouldn't have to limit themselves to being in the background if they really desire the spotlight.