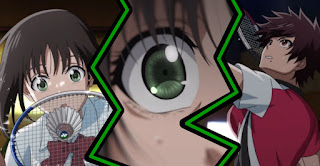 Who knew that badminton could be so...dramatic?

After watching Megalobox last season, I've taken more of an interest in sports anime, which is why I immediately jumped on the hype train for Hanebado!, a sports anime about badminton. While Hanebado! failed to give me the motivation to go outside and play a game of badminton with some friends, I was very entertained from beginning to end.

Hanebado! is about two main characters. There is Ayano Hanesaki, who used to be a monster of badminton, defeating her opponents with seemingly little effort. However, in high school, Ayano has no interest in the sport, does her best to avoid the badminton club, and in no way resembles the merciless athlete that she used to be when she was younger. Hanebado! follows Ayano as she joins the high school badminton club and reveals why she quit playing in the first place while she starts to go back to being that scary badminton player from the past.

Along with Ayano, there is also Nagisa Aragaki. She played against Ayano in a tournament and was terribly defeated by the talented Ayano. Ever since the defeat, Nagisa has practiced hard so that she could overcome her previous performance while also defeating the mindset that led to her original loss. Unfortunately, Nagisa's drive, pushes away her friends and the other members of the badminton club, and only when Ayano reenters Nagisa's life does she realize how mistaken she's been in her training.

Another problem that I had with Hanebado! was with the tone of the anime. A lot of moments, especially in the first episode, the tone was very melodramatic and bleak, like the potato chip scene from Death Note. But then the anime would suddenly shift into being quirky and fun, like K-On! or any other slice-of-life anime. It made some situations very strange and I wasn't sure exactly what I was supposed to be feeling. There were some moments that were just so over-the-top and unbelievable that I laughed when I know that the series was treating those moments as serious.

But I did like the animation of Hanebado! because not only were they fast-paced and beautifully animated, but they also caught my attention and made me invested in every match. Even during matches between two side characters that I really didn't care about, I cared in those moments.

So while I don't think that Hanebado! is a great sports anime, I do think that it is a very entertaining show that I loved watching every week. For anyone that is looking for a fun series with plenty of melodrama and intense animated badminton matches, I recommend checking out Hanebado!
Posted by AJ at 11:30 AM