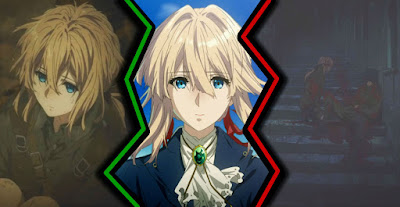 She was a soldier who only knew war, but she grew up and learned how to love.

I do not think that many can argue that Violet Evergarden is not a beautiful series. The art and animation are more gorgeous than reality. What I do hear argued when critiquing the series is whether or not Violet is a good main character. I am really not interested in engaging in that debate right here and right now, but I will express that she was one of my favorite anime characters of 2018.

She looks like Saber from the Fate series, she has mechanical limbs like Edward from Fullmetal Alchemist, and she's almost as cold and distant as Rei from Evangelion. When the audience is given their first chance to know Violet, she maybe beautiful, but she's not at all charismatic and not very friendly. So then why do I find her such an interesting character, and so interesting that I call her one of my favorites?

I consider Violet to be one of my favorites because of her backstory. She's not just expressionless and awkward to fulfill the kuudere trope. Violet is a result of her lonely and tragic past. She was a soldier who only knew how to fight and follow orders. Fighting as a little girl, she earned the nickname "Leidenschaftlich's Soldier Maiden" and was rightfully feared by her enemies. But when the war came to an end and she lost her major, Violet was lost.

Violet was addicted to following orders and without a war to fight or a commander to follow, she had lost her purpose in a world trying to heal after years of brutal fighting. Violet became a doll, figuratively and literally.  She was given a job as an auto memory doll, a woman who wrote letters for people who could not write or express their true feelings to those closest to them.

She was a character who I could sympathize with after learning her backstory. Violet was someone who wanted to understand the basic feelings and relationships that we sometimes take for granted. She wanted to know the meaning of love and throughout the series she learned that even though love was not so simple that it could be put into words, she would find just the right words that expressed that feeling to those who needed it.

I do not think that the story of Violet Evergarden would have been as interesting and heartfelt if Violet was not the main character. Seeing a girl with childlike innocence and a painful history learn how to love and to live a life that was not defined by fighting really hit hard. I always like seeing characters go through drastic changes and Violet is a character who went from being a soldier, to a doll, and finally to a woman. While the series might not be for everyone, I fell in love with Violet from Violet Evergarden.