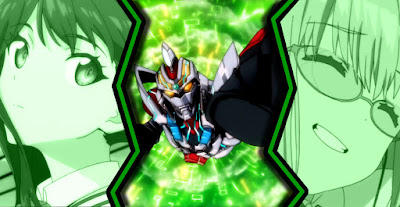 I love Studio Trigger. Kill la Kill is one of my favorite anime of all time, Space Patrol Luluco is a fast-paced and fun adventure, Inferno Cop is strangely charming, and Darling in the Franxx is a disappointment that I can't help but love. So when SSSS.Gridman started airing during the last Fall season, I was already pretty hyped up.

SSSS.Gridman is about three teenagers who encounter a robot hero known as Gridman through an old computer system. With the help of Gridman, the teens battle giant monsters, kaiju, that threaten the city. It's a pretty standard monster of the week set up. The twist is that the residents of the city never remember the kaiju attacks and the entire city is not even scratched the following day. Only the main characters know about the kaiju and Gridman.

I would describe a Trigger anime as very over-the-top and full of energy and life. SSSS.Gridman fits that description, but when I first started watching it, I noticed that there were plenty of moments that were very still. Characters would not be moving, they would often be alone, and there would just be silence. Those moments just screamed that something big was going on behind the scenes and it turned out that SSSS.Gridman was not just a fun mecha show that it presented itself as in the beginning.

Like with a lot of Trigger anime, there is more to the story besides noble heroes fighting evil villains. As SSSS.Gridman progresses, the world that is introduced is not what it seems and more mysteries arise with every episode. If this is starting to sound like Darling in the Franxx, that's because it kind of is, but I think Gridman pulls it off a lot better. The plot twist doesn't come out of nowhere, it all makes sense in context, and it doesn't feel rushed.

Besides being a Trigger anime with a lot of intrigue and suspense, SSSS.Gridman sets itself apart from its studio siblings by taking a lot of inspiration from Tokusatsu shows. SSSS.Gridman feels like one of those kinds of shows with giant robots and kaiju that, for the most part, move and fight like they're people in awkward rubber suits. It's really fun to watch. As someone who grew up with Power Rangers, I thought that aspect of the anime made it really fun, and now that I finished the anime, I really want to watch tokusatsu shows like Kamen Rider, Ultraman, and Gridman the Hyper Agent.

SSSS.Gridman was one of my favorite anime of 2018 and while I would highly recommend it to anyone, I especially think that this is a must watch for fans of Studio Trigger and for anyone who likes suspense and plot twists. If you already watched SSSS.Gridman, let me know your thoughts. I want to know if you loved it, hated it, or were indifferent to the whole thing.