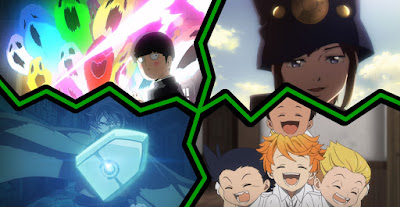 We're just a few weeks into 2019 and already there's a bunch of new anime to watch!

I've gotten into the habit of watching seasonal anime and keeping up to date with everything new and trending in the anime community. It doesn't look like I'm breaking that habit this year, so here are some of my first impressions of the shows that are airing this Winter season. 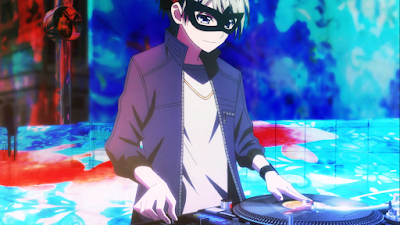 Apparently this series is a sequel to Hand Shakers and no one knew that it was going to be a sequel. I went into this series pretty much blind, and as someone who has never seen Hand Shakers and knows next to nothing about that world, I think W'z has potential to be a pretty good series and I wasn't too confused. Now Hand Shakers has a pretty meh score on MyAnimeList and I've seen a few people on Twitter complain about the animation. There are some moments in W'z where the CG is really out of place and there are moments where characters look awkward, but overall I really dig the look of W'z. At the moment, I am trying to decide if I'm going to keep up with W'z this season or first go back and check out Hand Shakers. 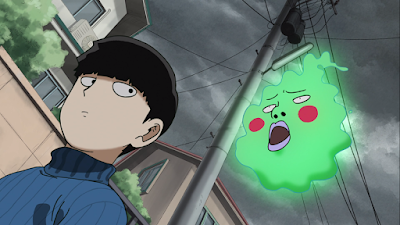 It's been awhile since I saw the first season of Mob Psycho 100 and before watching the second season, I was wondering why I gave it a 10/10 on MyAnimeList. Watching the new season of Mob Psycho 100 quickly reminded me how much I loved this series. While Mob is an awkward main character that is seemingly devoid of emotions, he's a really good boy that you want to see win. And the animation, especially in the action scenes, is still amazing and probably some of the best animation from this season, or at least the most stylized. I love Mob Psycho 100 and I have a feeling that I'm going to end up giving this season a 10/10 after just the first two episodes. 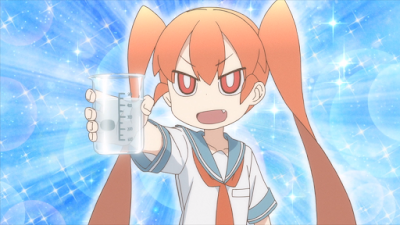 How Clumsy are You, Ms. Ueno?

Ueno is a middle school student  with a crush on a boy and she uses her inventions as a way to give the boy a hint that she likes him. Unfortunately, the boy that she likes is so dense that he often misses the point of Ueno's schemes. Most of the time, Ueno actually ends up making a fool of herself and seemingly never gets closer to her crush. With a plot like that, How Clumsy are You, Ms. Ueno? has a lot of comedy potential. There were a couple jokes from the first two episodes that I found really funny and others that were just amusing. Sometimes it takes the jokes too far and what was absurdly hilarious becomes uncomfortable and sad. I'll probably keep watching since each episode is pretty short, but I doubt that this will become one of my favorite comedies. 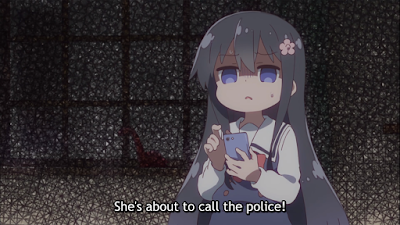 WATATEN!: An Angel Flew Down to Me

A college student falls in love with a fifth grader is a pretty problematic premise. I should not even have to explain why WATATEN!: An Angel Flew Down to Me could be seen as uncomfortable or even disgusting. Being in the anime community, I'm familiar with the jokes about lolis and I know that anime can be pretty scandalous. The reason I even started watching this show was because the art style seemed very moe, so I was hoping that the young girls would not be sexualized and the situations they found themselves in would not be illegal. Fortunately, the show is actually very cute and while the college student who falls in love with the younger girl is creepy, the audience isn't being convinced to root for her. This show isn't a romance, but a wacky slice of life comedy. I will admit that WATATEN! is my guilty pleasure of this Winter season. 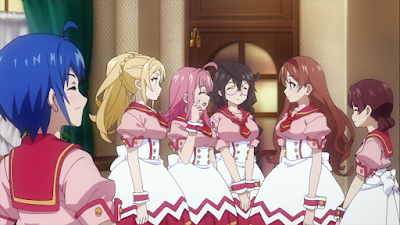 Do you feel like your life is lacking in the cute anime girls department? Well Pastel Memories has just what you need because there are like 12 cute anime girls introduced in the first episode. This anime takes place in Akihabara, Japan in a world where anime, manga, and otaku culture has pretty much gone extinct. The main girls work at a cafe that is also a kind of museum of otaku culture and in the first episode the girls go on a hunt for a collection of manga to save a customer's precious memories. I liked some of the humor from Pastel Memories and I'm interested in some of the girls, but I was also kind of bored throughout the first episode. Fortunately, there was a kind of plot twist at the end that hooked me a little bit. 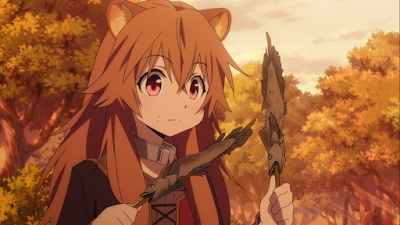 The Rising of the Shield Hero

I think that The Rising of the Shield Hero has a found an interesting take on the isekai genre. A hero summoned to another world where he ends is seen as useless and ends up being hated by the same world he is supposed to save. It's an interesting premise, my only problem is that I don't really like the main character. The first episode set up a situation where an audience should feel bad for him, and I do, but that doesn't mean I find him likable. After the first episode, I was thinking that I might end up dropping this series, but then I watched the second episode. The Shield Hero purchased a slave, a raccoon girl named Raphtalia, to accompany him and help him level up. Raphtalia is adorable! She's best girl of the season and I'm probably going to be watching the rest of The Rising of the Shield Hero just for her. 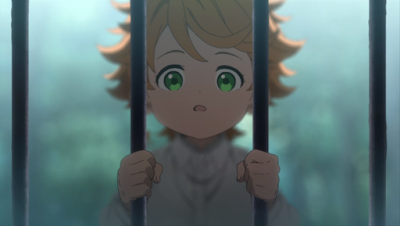 This is one of the few times where I can say that I read the manga prior to the anime. I have been reading The Promised Neverland for a few months now and I'm about 60 chapters into it and I love it. I had some high expectations for this anime, especially for the first episode and I am happy to report that I was not disappointed. If you have not yet watched the first episode, I highly suggest that you check it out. I really don't want to spoil anything, so I won't say much more. I also just realized that I have said nothing about the plot of the first episode, and I don't think I will here because I don't want to spoil anything at all. If you're looking for an anime with plenty of plot twists and suspense this anime has all of that and more. I am ready to call The Promised Neverland a contender for anime of the year, but it is definitely already one of my favorites of this season. 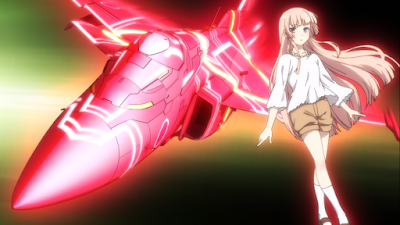 This is another anime where I have a problem with the main character. In Girly Airforce, the main character is too angsty for my taste. Maybe if he was shouting all the time or more over the top, I would find him funny, but as he is now, I find him annoying. I was also expecting this anime to be more of a "cute girls doing cute things" anime, so I will admit that I'm disappointed that it's actually a sci-fi action series. Fortunately, the main girl is cute and I'm expecting the other girls will be just as appealing. The first episode may not have made a good impression, but the second episode was a little better, I'm just hoping that the third episode really hooks me. 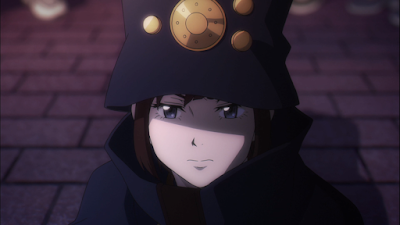 Boogie Pop and Others

This is a series that I was expecting a lot from especially since the light novel that it is based on seems to be highly praised by fans. With a name like Boogie Pop and Others, and knowing that it's supposed to be a psychological horror, I may have had some high expectations. That is why I'm a little let down that I don't see why Boogie Pop and Others deserves such praise. Maybe I have to stick with it for a little longer to see why it's so critically acclaimed, or maybe the anime is a poor adaptation. I don't dislike this series, I'm just not to invested in it and the nonlinear story, at least from the first three episodes, is a little jarring. I'm also starting to think that a lack of a sympathetic main character to root for is also preventing me from really enjoying Boogie Pop and Others. 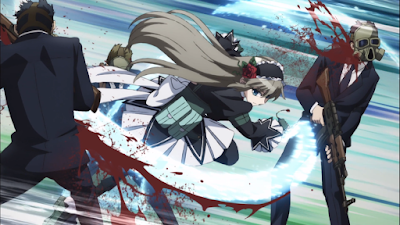 Once, Asuka was a member of an elite team of magical girls that saved the world from monsters. Now, Asuka has abandoned her past and attempts to live a normal life as a high school student. Unfortunately, her new life and friends are threatened and Asuka is forced to become a magical girl again. Magical Girl Spec-Ops Asuka reminds me of an action film like Rambo or The Terminator and I love it. It's an action series with all the fun fight scenes and blood, but also with a magical girl twist that makes it something special. I really wasn't expecting much from this series, and I'm still not expecting it to be very deep, but so far it's one of my favorite anime from this season. 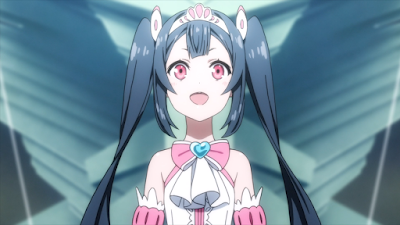 The Price of Smiles

I think that this anime has the potential to be really interesting. The Price of Smiles takes place in the future and is about a princess who is being left in the dark about a war so that she can continue to smile and give her people hope. I find the premise interesting because this anime can show how happiness is usually a result of ignorance and the real world is actually full of suffering and never-ending conflict. Unfortunately, nothing really stands out in The Price of Smiles and it comes off as boring. The only thing that really did catch my attention was how the princess resembles Nico from Love Live. I will watch for at least until the third episode because the cliffhangers are at least keeping me intrigued about where this anime will go. 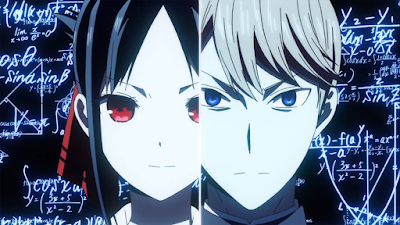 This is probably my favorite comedy of this Winter season. It's an anime about two geniuses who fall in love with each other but won't confess to the other out of pride and to keep from being the "loser" in the relationship. So instead of asking the other out, the two try to scheme in order to get the other to confess their romantic feelings. The two main characters play Death Note levels of mind games, trying to trick the other into admitting they like the other and it's comedy gold. Kaguya-sama: Love is War has just started but the hype I'm getting hearing about it and after experiencing the first episode,  I would not be surprised if this becomes one of the best anime of the year. 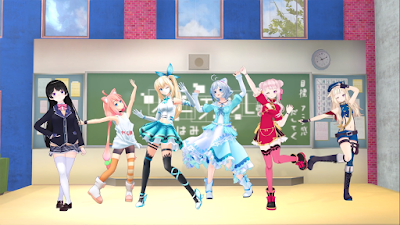 Besides watching anime, I spend a lot of my free time watching YouTube. Even if I'm writing or reading, I'll usually have a YouTube video playing in the background. So it's no surprise that I watch virtual YouTubers like Kizuna Ai and Kaguya Luna. I had no idea that VIRTUAL-SAN Looking was an anime coming out this season and I never though I'd see an anime staring several popular virtual YouTubers like Mirai Akari and Cyber Girl Siro. Like a lot of videos from those virtual YouTubers, VIRTUAL-SAN Looking is made up of a bunch of short skits with random and absurd humor. It's kind of like the Pop Team Epic of 2019. So far, I find the anime entertaining and hilarious, but I bet that overtime I'll realize that the jokes are more random than funny.

So those are just some of my thoughts on the anime debuting in the Winter season of 2019. Let me know what you think of this season's anime and let me know if there are other series that I am missing out on and should check out as soon as possible.