Why You Should Watch "Miss Kobayashi's Dragon Maid" 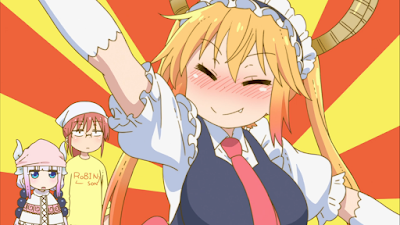 A slice of life anime about a very odd but lovable little family.

Miss Kobayashi's Dragon Maid, or Kobayashi-san Chi no Maid Dragon, was one of the most talked about anime series last year and I think that it is fair to say that it left quite an impact on the anime community that can still be seen today. This was actually a series that I did not watch while it was airing, but one that I practically binged later because it was just so fun. 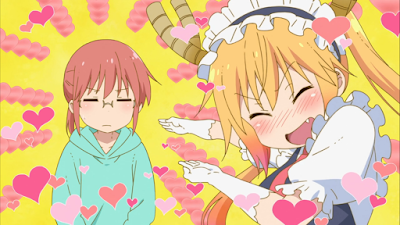 So as the name suggests, Miss Kobayashi's Dragon Maid is about Kobayashi and her new life with dragon's, specifically a dragon named Tooru who agreed to become Kobayashi's maid after a Kobayashi pulled a sword out of her followed by some drinking. At first, Kobayashi is reluctant to have Tooru as a maid, especially with how little Tooru understands about the human world and how to be a proper maid. Though as the two get to know each other better and gain understanding of one another's worlds, they gain respect and affection for each other. 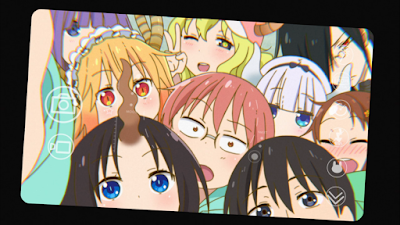 After welcoming Tooru into her home, Kobayashi is introduced to many of Tooru's dragon friends who suddenly become a part of Kobayashi's daily life. There is Lucoa, the ex-goddess and fire serpent better known as Quetzalcoatl; Fafnir the gloomy and dreaded dragon who is disgusted by humanity but almost immediately becomes a gaming otaku when he starts living among them; and there is Elma, a dragon from the Order Faction who came to earth in pursuit of her rival Tooru, but ended up staying because of a love for sweets. 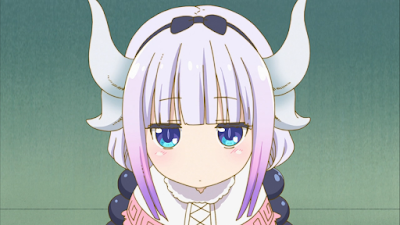 There is also Kanna, who you probably recognize if you're familiar with popular anime memes. She is an adorable dragon loli who came to earth after she was put in time out (banished) for just being a loud kid. She met Kobayashi while in search of Tooru and though Kanna suspected Kobayashi seduced Tooru, Kanna also joined the Kobayashi household and started attending school, playing the role of Kobayashi and Tooru's dragon daughter. 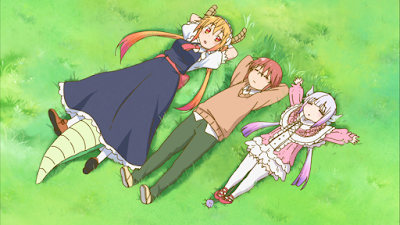 I previously referred to Miss Kobayashi's Dragon Maid as a show about a family, but until I started rewatching the show to grab some screenshots of the characters did I realize how much this anime is a sweet and wholesome depiction of a family. Like Hinamatsuri, which aired last season, Miss Kobayashi's Dragon Maid is a sitcom anime that shows some very random characters building a relationship that becomes what can only be described as a family. Sure, this is a comedy, but what I think makes me love this series is the perfect family created by Kobayashi, Tooru, and Kanna. 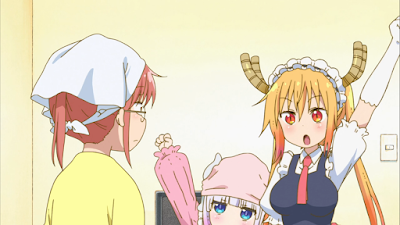 So, if you are looking for an anime about a (really) non-traditional family and their friends doing things like playing dodgeball, competing in a cooking contest, or just going through an ordinary life with a little bit of magic and monsters thrown in, I suggest that you check out Miss Kobayashi's Dragon Maid.