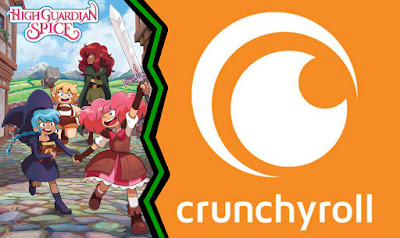 Crunchyroll is producing their own "anime" series and many are already disappointed just from the first look.

For those who do not know, Crunchyroll is a legal streaming service for anime, and one of the services that I use to watch some of my favorite series like My Hero Academia, Kill la Kill, Fate/Zero, and A Place further than the Universe. Now about a week ago, Crunchyroll announced that they were going to be producing an original anime series called High Guardian Spice and had a trailer with a first look at the series. You can check out the trailer through the link here. The response to the trailer has been overwhelmingly negative.

Many anime fans have made their criticisms and frustration clear all over the internet and several anime YouTubers have made videos sharing their own opinions on the topic. One of my favorite AniTubers, Lost Pause, made a video listing all of his problems with High Guardian Spice's trailer that I think sums up a lot of what fans hate about the project. You can check out his video through the link here, because I want to just go over my own thoughts on the whole situation.

In Lost Pause's video, he talks about how the trailer does not really provide good reasons for why High Guardian Spice is a show people should watch and it does not really sound unique as the writers and producers of the show claim. I agree with this opinion. The trailer does not effectively tell me what the series is about and there are no clips in the trailer that hype me up. The trailer is more of an announcement for the project than an actual trailer.

The brief description of High Guardian Spice also does not give me an idea on what the series is about and how it is different from other fantasy adventure series. Four girls in a magical city going to a school to learn how to become guardians is a very vague premise that can go in many different directions, meaning that no one really knows if it's a story that will appeal to their tastes. Overall, the trailer is a bad first impression.

In the trailer, the supervising director of High Guardian Spice brags about how the show is made with 2D animation and that is something other studios have forgotten how to do, which does not sound like an accurate statement. While it is true that a lot of animated films and shows are made with CGI, and even some anime series include elements of CGI, 2D animation is still used in a lot of anime series, making it something that shouldn't be used to make High Guardian Spice sound special. I agree with Lost Pause on this point as well.

I disagree with Lost Pause when he says that High Guardian Spice is trying to make an SJW statement over being entertaining. While I do think that the trailer does not show why the series is going to be entertaining, I do not think that there is a problem with a show making a social or political statement. All stories - comic books, movies, and anime - make some kind of a statement or push some kind of social agenda. Revolutionary Girl Utena is an anime that makes very feminist and queer statements, and even something more mainstream like Death Note has something to say about morality and justice.

I should also note that I do have a problem with Crunchyroll using the word "Diverse" when all of the women seem to be white. If they were really trying to promote diversity and representation, I do not see why they do not show any writers or production staff members that are people of color. Maybe they do and they just weren't shown in the trailer, but that is my biggest problem with this whole situation.

Finally, Lost Pause mentions that High Guardian Spice seems more like a cartoon, like Steven Universe, than an anime, even an American anime like RWBY. I decided to look up the definition of "Cartoon" and found that it is defined as,

a motion picture using animation techniques to photograph a sequence of drawings rather than real people or objects.


I know that a lot of people in the anime community don't like to admit it, but anime are cartoons. Obviously, what we call anime is a lot different in story structure and and content than a lot of western cartoons, but they are still cartoons. I also think that it is funny that he used Steven Universe as an example of a cartoon when Steven Universe is heavily influenced by anime series like Revolutionary Girl Utena and other magical girl series.

So...will I be watching High Guardian Spice? I'm waiting for an actual trailer for the series, but I think that I will check out the first episode to see if it's any good. If it turns out to be entertaining and legitimately unique, than I think that I will watch it until the very end. Let me know what you think about High Guardian Spice in the comments below. I do want to know why people hate the idea of it or if they're going to check it out at all.
Posted by AJ at 9:30 AM