Why You Should Watch "My Hero Academia" (Season 2) 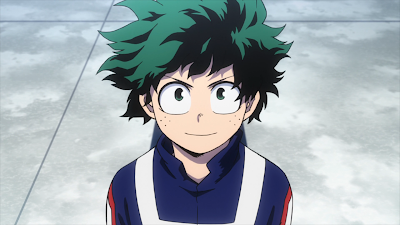 Putting the skills and abilities of heroes to the test makes for one of the most epic tournaments!! 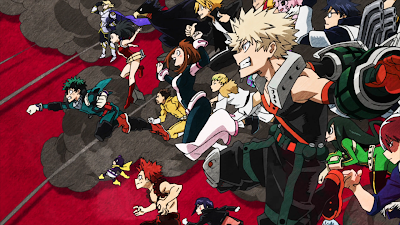 I think that season one of My Hero Academia was a great introduction, succeeding at introducing a world of superheroes and a huge cast of characters, as well as being just an interesting shounen series with one of the most lovable and relatable shounen heroes. With the introductions out of the way, season two of My Hero Academia dives further into this amazing world and looks deeper into the lives of characters who might not have gotten much screen time in season one. 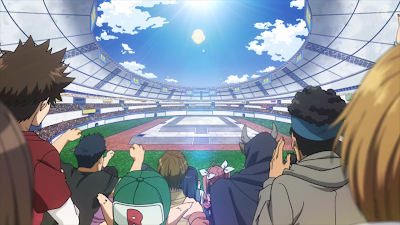 There are two main story arcs in season two of My Hero Academia. The first arc is about UA's sports tournaments where the students of UA compete and battle against each other to earn an internship with some of the top heroes. We are reunited with characters like Deku, Ochaco, Tenya, and Katsuki, while also introduced to new characters like Hitoshi Shinsou and Mei Hatsume. In the second arc, Deku and his friends end up dealing with another attack from the League of Villains and from the mysterious and dangerous Hero-Killer Stain. 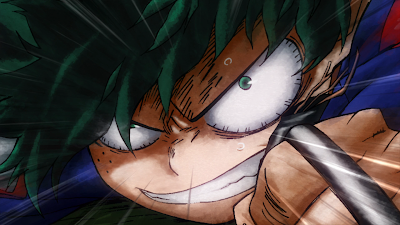 I already talked about Izuku "Deku" Midoriya twice on this blog, so if you want to get an indepth look at Deku, either check out this post on season one of My Hero Academia or this post on one of my favorite anime characters. In the second season of My Hero Academia, Deku proves even more that he is worthy of succeeding All Might as the greatest hero and learns more about the powers that he was given. 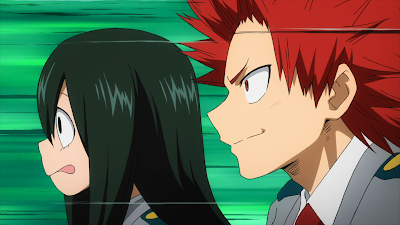 But honestly, as loveable and cool as Deku is, he ends up being outshined by his friends in this season of the series. There are actually so many great characters and moments in this season that I am only going to go through a few of them so that I don't waste too much of your time, fortunately, you can enjoy the characters that I don't mention if you watch season two of My Hero Academia right after reading this post. 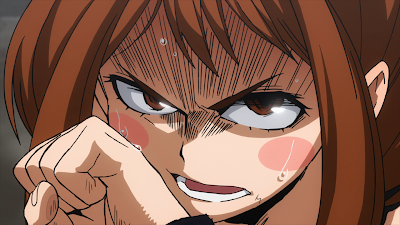 One of the many characters that shine in this season is Ochaco Uraraka. In the first season, Ochaco is set up as being one of Deku's best friends and also his potential love interest, and though she is an interesting character, she is always associated with Deku. But in this season, Ochaco proves that she is a hero who can fight for herself and compete with some of her more powerful classmates. Her match against Bakugo was probably one of the best fights in the entire series. Ochaco known for being pure and lighthearted giving her all against the furious and dangerous Bakugo was one of the most heartbreaking and inspiring moments in anime. 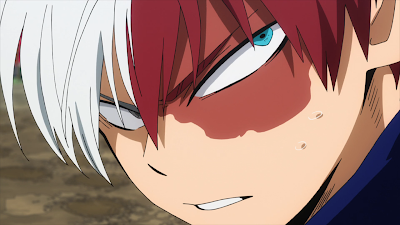 If there is a fight that rivals Ochaco v. Bakugo, it would be Deku v. Todoroki. Even though Todoroki was a fan favorite from season one, he actually didn't have a lot of screen time until season two. Moody and quiet, Todoroki seemed to be almost the opposite of the passionate and positive Deku, but throughout this season, Todoroki showed that he was just as determined to be a hero. But while Deku wanted to be a hero like his idol All Might, Todoroki wanted to be a hero that was free of his father. Deku and Todoroki's fight was intense not just because both characters are so powerful but because, as an audience, we want to see them both realize their dreams knowing that only one can win in the end. 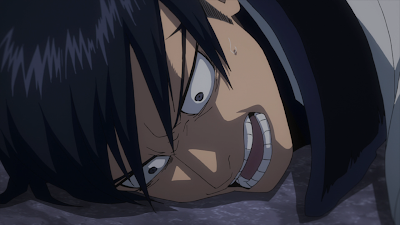 In the second arc of this season, the students of UA come face to face with the Hero-Killer Stain, a man who uses his own quirk to mercilessly slaughter heroes. One of those heroes who is attacked by Stain is Tenya Iida's older brother, pushing Tenya over the edge and on a path of blind vengeance. It is a scary transformation, knowing Tenya as a rational and orderly student and seeing him become a frustrated vigilante who pushes his friends away in his quest for vengeance. 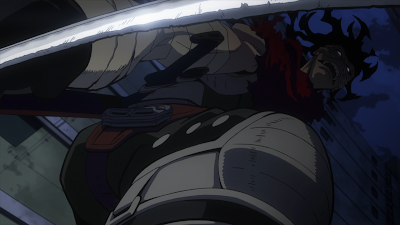 While we do feel sympathetic for Tenya, we also start to understand the motives of the Hero-Killer Stain and also get a glimpse into the shadows that lie within this world of superpowers and heroes. Though he is introduced as a brutal killer who goes after anyone in his path, there is actually a philosophy behind his actions, and his motives come out when he is confronted by the vengeful Tenya and the valiant Deku. 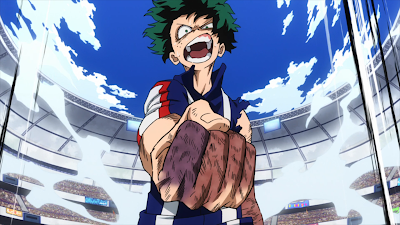 There is actually a lot about season two that I left out, so I hope that you check out this season of My Hero Academia so that you can enjoy all of the excitement and drama for yourself. If you enjoyed season one, then I have a feeling that you are going to love season two, and if you happen to complete season two, maybe check out season three which is going on right now.