Who is Selina Kyle? 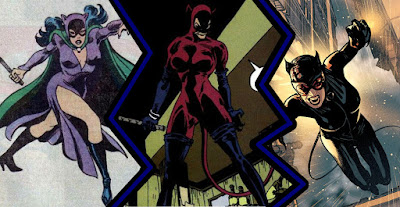 I haven't done a character profile in a while and I was having trouble deciding on what character to choose. After having a conversation with some friends regarding cats, I reasonably started thinking about Catwoman and realized how important she is as a character in comic books and popular culture.

I'm going to jump straight to Catwoman's roots and her role as a character in the Batman mythos. Back when she first appeared in the 1940's, Catwoman was a thief and master of disguise who robbed the rich and famous and ended up in conflict with Batman and Robin. She also wasn't called "Catwoman" and didn't dress like a cat. She was just called "The Cat" and managed to evade capture only to appear again and again as one of Batman's most persistent foes...and love interest.

Like most comic book characters, Catwoman has several origin stories told by many comic book writers and artists. I think that one of the most popularly accepted origin stories, and the one that I am more familiar with, is from Frank Miller's "Batman: Year One". Selina Kyle was a prostitute in Gotham City with exceptional acrobatic abilities and above average fighting skills. She also had some talent with a whip.

After Batman showed up in Gotham City and began his war on crime, Selina Kyle took advantage of the new Gotham and started to rob the wealthy and infamous men and women of Gotham's underworld. Inspired by Batman, Selina didn't just rob people, she did it all dressed as a cat, complete with claws.

Though Catwoman is one of Gotham City's most notorious criminals, she is far from evil. She's like a modern day Robin Hood, stealing from the rich and protecting the poor and weak. She wasn't born into wealth like Batman, Selina knows how harsh and dangerous Gotham City can be, and even though she uses steal to feed her own greed, she also provides for the forgotten and downtrodden. Several times, Catwoman has worked alongside Batman and his allies, and fought some of Gotham City's more dangerous rogues.

Catwoman is also one of Batman's most meaningful love interest. More than most, Catwoman knows what it is like to lose one's self to a mask and to sacrifice a normal life for others. In almost every version of the characters, Catwoman and Batman have always found each other and fell in love...even though their relationship doesn't always last long. 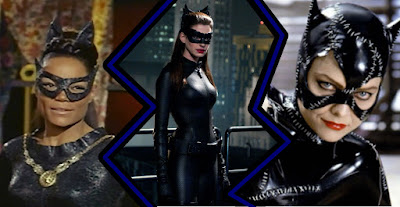 Besides comic books, Catwoman has appeared in several movies, TV shows, cartoons, and video games. Her first live action appearance was in the 1960's Batman TV series starring Adam West and Burt Ward. Throughout the TV series, Catwoman was portrayed by Julie Newmar, Lee Meriwether, and Eartha Kitt, and usually came into conflict with Batman and Robin because she was always trying to steal some cat-related artifact.

Camren Bicondova is currently portraying a young Selina Kyle on TV's Gotham. Though she still hasn't made the transformation into the whip-wielding femme fatale, Camren's portrayal is a perfect look at a young Catwoman.

In film Catwoman has been portrayed by Michelle Pfeiffer in Batman Returns and Anne Hathaway in The Dark Knight Rises. I think both actresses played great Catwomen, but I think that Pfeiffer's look and performance has made more of an impact on popular culture. Halle Berry also portrayed the character in Catwoman but since that movie has almost nothing to do with the comic book character, I'm not going to say anything more about it. 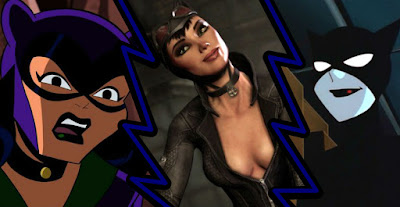 Catwoman appeared with Batman in almost every iteration of the character, perhaps even challenging his own fame with her own. She is one of the most popular characters in comic books and has had almost as much as an impact on popular culture as Superman, Batman, and Wonder Woman. I think that as long as Batman exists, there will always be a Catwoman.