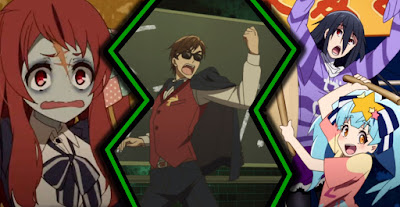 Zombie Land Saga was probably one of the biggest surprises of the last Fall season and it was one of my favorite anime of 2018. When the first trailers came out for Zombie Land Saga, I was expecting a comedy that took place in a zombie apocalypse. What I didn't expect was an anime about zombies who are brought together to form an idol group in order to save the Saga prefecture in Japan.

I would actually recommend watching Zombie Land Saga without reading the rest of this recommendation post. There are so many fun surprises in this show that you might enjoy it more without me pitching it anymore. If you're still not convinced, go ahead and keep reading.

Sakura Minamoto is a high school girl with a dream of becoming a famous idol but wakes up to discover that she's a zombie. Unfortunately, Sakura has no memories from when she was alive and her predicament comes as a shock when she finds herself surrounded by other zombies and an obnoxiously loud manager. Along with her fellow zombies and under the direction of the manager, Sakura must save Saga through idol antics.

The premise has plenty of promise for hilarity and it does deliver. The first two episodes were especially fantastic with a death metal concert and a rap battle. Sometime in the middle of the series, I felt like Zombie Land Saga was losing me by focusing more on the relationships and dynamic between the characters, but it still never failed to give me the zombie gags that I fell in love with since the first episode. This was an anime that I looked forward to every week knowing that I was going to be laughing and smiling from the opening to the ending.

And if a pure comedy series is not for you, Zombie Land Saga has some drama as characters from different eras clash and there are some heartfelt moments when characters relive their deaths and make peace with the loved ones they left behind. There were a few moments when I was almost brought to tears.

I mentioned how Zombie Land Saga is an idol anime and it really is an idol anime, not just a comedy or a satire of idol anime. There are also some jarring 3D models of the girls singing and dancing when they have concerts. The last half of the series really feels like an idol anime with a lot more focused on the importance of friendship and family between the girls and catchy Japanese pop songs.

If you are still not convinced, Zombie Land Saga has some great characters who are all worthy of the "Best Girl" title. Even the manager can be called "Best Girl" and I wouldn't argue otherwise. I already made a case during the "12 Days of Anime" about why Lily is my favorite zombie girl from this series.

I think I've went on for long enough about why I love Zombie Land Saga. This is an anime that I highly recommend and I really hope that it gets a second season. It's such a fun show that I really enjoyed watching. If you did check it out, go ahead and leave a comment. I want to know what you thought about it and feel free to recommend me similar idol or zombie anime that I should watch next.