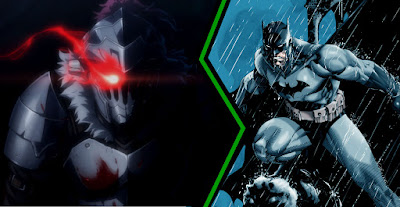 Goblin Slayer was one of the most anticipated anime of the last Fall season and also ended up being one of the most controversial after the first episode. It's a little late for me to give my opinion on the controversy, so I really won't say much about it. A lot of other anime content creators have given so many different perspectives and opinions on the subject that I really can't add anything new or relevant to the conversation.

The only reason I even mention the controversy is to warn anyone who has not heard about Goblin Slayer to let them know that the first episode has some disturbing violence and sexual assault scenes. For anyone who has not watched Goblin Slayer and is not comfortable with that kind of graphic content, I would suggest skipping over the first episode or just entirely avoid the series.

What I did want to talk about in this post is the biggest reason why I enjoyed Goblin Slayer and that is his similarities to DC's Batman. As a geek, I love anime and manga and I want to be a prominent figure in the anime community, but before I took an interest in anime I was in love with comic books and superheroes. I remember what it was like to discover a new superhero and quickly learn everything about the backstory and adventures. I remember buying monthly issues of Green Lantern and digging through back issues in a comic book store. 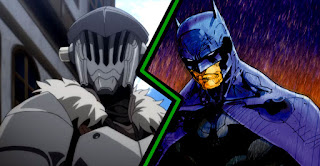 When an anime reminds me of my original geek love, I can't help but get attached to the series. That is why My Hero Academia is one of my favorites, because it not only is a traditional shounen anime, but I see it as an homage to American superheroes. So while the first episode of Goblin Slayer made me uncomfortable and I was prepared to drop it, the main character and his allies reminded me of something. The more I watched, I realized that the character Goblin Slayer reminded me of my favorite dark knight detective, Batman.

Sure, Batman is a character that has been interpreted in so many different ways by many artists and writers since his creation that there are probably dozens of characters that are similar to some variation of Batman. The Batman that first appeared in 1939 was also not the most original character. He was created after the appearance of Superman and was an amalgamation of Dracula, Zorro, and Sherlock Holmes. Batman as a romantic outlaw vigilante is an archetype that can be found in many stories besides Goblin Slayer.

That does not change that fact that Batman and the character Goblin Slayer have so much in common that it's difficult to not think of Goblin Slayer as the Batman of his own world. Like Batman, Goblin Slayer is a victim of a tragic past that drives him throughout his life. His family and entire village were slaughtered and tortured by goblins before his very eyes. The horror that he witnessed led him to train into a warrior skilled enough to wage a war on the goblins, not resting until all the goblins have been slain. This origin is similar to Batman, who witnessed his parents gunned down in front of him, followed by a vow to become a vigilante who wages a war on crime. 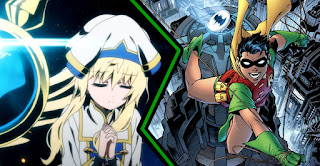 Batman and Goblin Slayer also take in young sidekicks who have gone through similar tragedies that they went through when they were younger. Batman took in Dick Grayson as Robin after Dick's parents were killed by a gangster. Goblin Slayer is joined by a Priestess after she is defenseless against goblins who brutalize her party members. These two sidekicks also don't share their respective partners' dark aesthetic.  Priestess is adorned in her white robes with blue and yellow trim, and Robin wears bright red, green, and yellow reminiscent of a circus outfit. Priestess and Robin also do not give into the same seriousness and antisocial behavior that define Goblin Slayer and Batman.

Both Batman and Goblin Slayer are also brilliant tacticians and formidable fighters. While he is skilled enough to take on greater foes and monsters, Goblin Slayer remains focused on hunting and eliminating goblins. Batman lives in a world of super villains like Darkseid and Black Adam, and he has proven capable of taking them on, but he also remains focused on his primary mission. Batman remains in Gotham City fighting madmen and gangsters like the Joker and the Penguin.

Batman and Goblin Slayer are also ladies men even though they don't try to be seductive or charming. No matter the adventure or mission, it seems like there are always women who can't seem to keep themselves from falling in love with the two lone wolf heroes. Though Batman seems to attract the affection of dangerous femme fatales like Catwoman and Talia al Ghul. Meanwhile Goblin Slayer makes the Temple of Law's Archbishop and his Elf companion blush whenever he shows his face (or doesn't show his face). 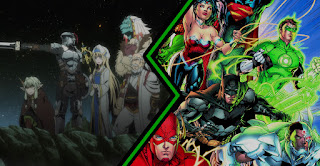 Finally, Goblin Slayer and Batman are two heroes who prefer to work alone but also end up find themselves surrounded by friends and fellow heroes. Batman not only has a plethora of sidekicks like Robin, Nightwing and Batgirl, but he is also a member of the Justice League and other superhero teams. Goblin Slayer joins a party of other adventurers to help them take on a large nest of goblins and when his childhood home is threatened by an entire army of goblins, he calls on the help of other adventurers.

These are the similarities that brought Batman to mind while watching Goblin Slayer and made it more of an enjoyable experience after the rough first episode. Of course, I am sure that Goblin Slayer is such a blank slate of a character that it is easy for him to be seen as a fantasy version of any person or character, and in a way, Batman is also that kind of blank slate. That's why there are so many interpretations of the character.

If there are comic books fans who have never watched anime or never heard of Goblin Slayer, you might find this to be a fun show that is worth checking out. If you did watch Goblin Slayer, let me know what you thought in the comments. I want to know why you liked the show or why you hated it!