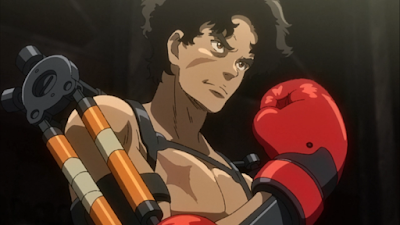 It's the classic story of an underdog who fights his way towards the top, but what does he fight for? Why does he fight?

This is going to be a little different than my usual posts, but when I tried writing a recommendation for Megalobox, I realized that I wanted to write more about my experience watching the anime. Megalobox was probably one of the most popular anime of the spring season and while I don't think it was my favorite, I appreciated the story, the music, and the characters. 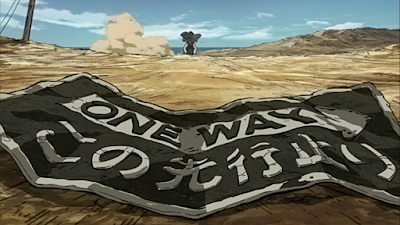 Let me set up the world of Megalobox. The story takes place in the future that seems to be split into two worlds. One is a shiny world of affluence and grandeur, and the other is dirty and desolate, but both worlds have a love for the sport of megalo boxing. It's like boxing, but the boxers where mechanical harnesses that give them superhuman strength and speed. 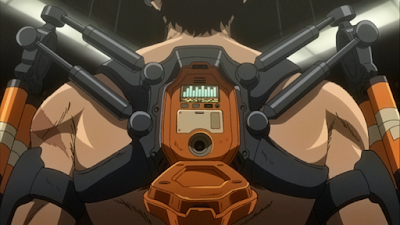 The main character is a "Junk Dog", a boxer without a name who throws underground fights, but he desperately wants to do something more.  When given the opportunity to enter a tournament called "Megalonia", he takes the name Joe and fights for a spot in the competition. Even more than just participating in Megalonia, Joe wants to face off against the megalo box champion, Yuri. 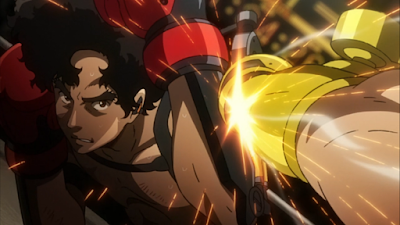 Joe doesn't fight for revenge and he doesn't fight for a loved one. He fights because he wants to prove, after fixed match after fixed match, that he's a real boxer. He fights because he enjoys fighting, and I kind of like that simple motivation, especially when it's revealed that Yuri has the same drive. Even though he's a rival who is directed by a sponsor, he wants to be free and fight solely for the sake of fighting. It reminded me of my own love of martial arts and sparring. It's an old passion of mine that I haven't revisted in awhile because of the clutter and demands of life, but after watching Megalobox, I desperately wanted to get back into it. I think that was why, even though I had problems with Megalobox's fast pace and was disappointed that I couldn't see more of the world presented in the show, I still really really liked Megalobox. 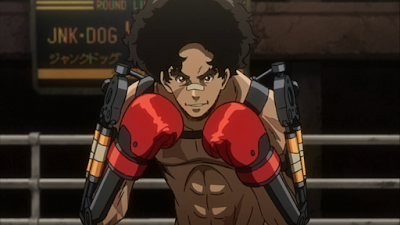 That is the true power of anime, and I think the power of any good story, it reminds an audience of their own passions and hits something really personal. While sometimes anime can be judged based on criteria like pacing, character development, animation, and music, I think it is also important to remember that anime can also be judged just on how it makes a viewer feel and the joy that the show can bring.