Why You Should Watch "Golden Kamuy" (Season One) 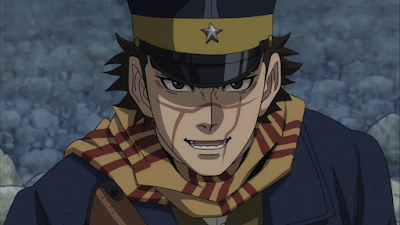 It may just look like a brutal historical anime, but it is also full of heartwarming and endearing moments.

I've said before that I was originally underwhelmed by the spring 2018 anime lineup but was impressed by the quality of stories and characters that were presented when I actually dived into the season. One of the series that I especially fell in love with, and cannot wait for the second season, was Golden Kamuy. 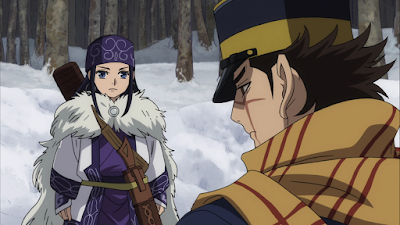 Golden Kamuy takes place during the Meiji Era in Hokkaido after the Russo-Japanese War, which, to my understanding, was a time of poverty and cultural change in Japan. I actually don't know a whole lot about Japanese history, but two articles from Crunchyroll and Anime News Network gave me some historical context for Golden Kamuy that I would recommend to anyone who wants to know a little more about the Meiji Era and the Russo-Japanese War. One thing that I found especially interesting after reading this history was the story of the Ainu people, the indigenous people of Hokkaido. However, I will say that I read these articles after completing the season and was still able to enjoy the show, though I do think that knowing the history adds to the enjoyment. 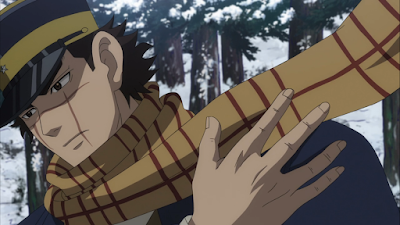 Saichi Sugimoto is a soldier who served in during the Russo-Japanese War and, after the devastating battle of 203 Hill, is alone and panning for gold to provide for the widow of a man who served alongside him. The man once called "The Immortal" Sugimoto is stuck performing tedious and slow work to keep a promise until he hears a story about hidden Ainu gold that can only be found by cracking a code tattooed on the bodies of several dangerous criminals. 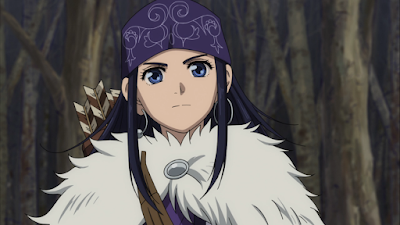 Sugimoto is joined on his quest by an Ainu girl, Asirpa, who agrees to help him in order to avenge her father who was killed by the man who stole and hid the Ainu gold. Asirpa is a master hunter and knows the land better than Sugimoto. Without her, he would likely either have been torn to shreds by a deadly bear or starved to death because of his amateur hunting skills. Besides being a helpful companion, Asirpa also keeps Sugimoto disciplined and keeps him from slacking off or succumbing to his brutal nature. 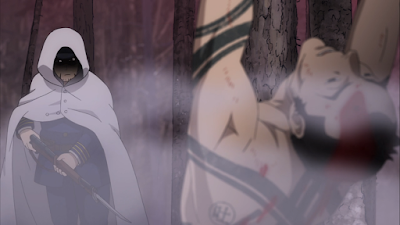 A journey to collect the tattoos of deadly criminals is no easy task. Not only do Sugimoto and Asirpa have to find and restrain the runaway convicts, but they have to compete with other dangerous people who want to find the Ainu gold for their own nefarious goals. There is the sadistic First Lieutenant Tsurumi and the 7th Division, the legendary swordsman Toshizou Hijikata, and the marksman Hyakunosuke Ogata. 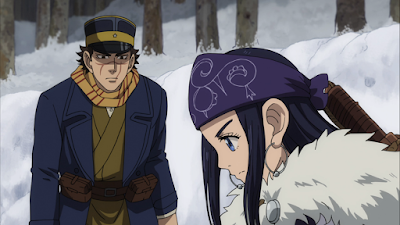 While I enjoyed watching the new enemies crop up in Sugimoto and Asirpa's path, the reason why I fell in love with Golden Kamuy was Sugimoto and Asirpa's relationship. Since I never read the manga that the series is based on, I don't know how there relationship develops or what the author wants people to take from it, but I saw them start out as strangers who had the same goal with different motivations, and grow into companions who not only support each other but respect and learn from one another. 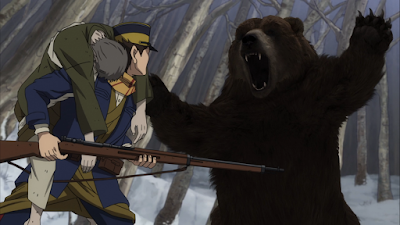 I will admit that Golden Kamuy has some pretty bad animation in a few scenes, the characters and story make up for it. I also think that the last episode of the season was kind of unimpressive, I was still invested in the story and am still waiting in anticipation for the second season coming in the fall. If you are someone looking for a seinen series with plenty of action and heart, I recommend that you check out Golden Kamuy.