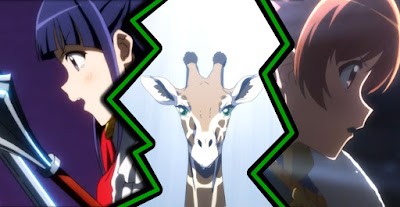 Shoujo Kageki Revue Starlight is an anime series that I doubt I fully understood, but it is definitely a series that I enjoyed from beginning to end. Like Penguindrum and Revolutionary Girl Utena, it's a very surreal experience where almost anything can happen and there seems to be a deeper meaning to almost everything that does happen in an episode.

As children, Karen Aijou and Hikari Kagura promised each other that they would one day become the top theatrical stars, working and training so that they could one day reach their dreams. The two girls are invited into an audition by a talking giraffe where they have to compete in a series of musical duels against their classmates. The winner of the auditions will become the top star, the question that remains: Can Karen and Hikari become the top stars together or is there only room for one of them at the top?

While an anime about theater girls does not sound especially special or exciting, Revue Starlight proves to be such through the musical duels. The girls competing in the auditions battle against each other using weapons like spears and spears, all while singing and performing. It's only something you can find in the artistry and bizarreness of anime.

While I won't explain all of the metaphors of Revue Starlight, or break down the meaning behind every episode, I can tell you one of the main themes of the series. Karen and Hikari are trying to achieve a dream together that is impossible to achieve. Together, they help bring the best out of each other so that they can defy a tragic fate and live a dream where they can both be happy along with their friends.