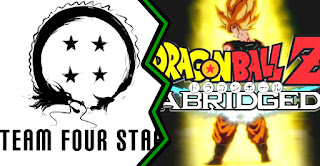 The season three finale of Dragon Ball Z Abridged came out yesterday and it was epic!!

I didn't grow up with the original Dragon Ball Z series. I do remember watching episodes of Dragon Ball Z with my uncle back when I was a little kid, but the show wasn't really a significant part of my life. All I really remember about it is that there were a lot of muscular super-powered guys shouting and fighting. So I'm not as attached to a the Dragon Ball series like so many other fans are who watched it every week or every day when they were younger.

I started seriously watching anime during my first year of college, and I started off by watching shows like Fullmetal Alchemist, Death Note, and Ouran High School Host Club. As I started to watch more anime, I became more aware of the anime community, specifically creators who posted anime-related content on YouTube. I ended up watching a lot of anime memes, anime reviews, and AMVs. I still watch a lot of these kinds of videos, but one kind of video that I loved to watch and rewatch were abridged anime series.

An abridged anime series takes clips from original anime series and dubs over the original dialogue with some jokes that parody the original. Characters are either the exact opposite as the originals or they are extremely exaggerated, and plots are either completely disregarded or made into jokes. One of my favorite abridged series and the one that I want to highlight and recommend is Team Four Star's Dragon Ball Z Abridged.

Team Four Star is a group of voice actors and editors who work together to create abridged anime series and other parodies on their channel. Dragon Ball Z Abridged is directed by KaiserNeko and written by KaiserNeko, Lanipator, Takahata101, and LordMoonstone. I not only respect and love the parody that Team Four Star have created, but I hope that they are able to continue to create things they love.

There are a lot of reasons why I love I Dragon Ball Z Abridged. Sure, the show is responsible for a lot of memes that I hear repeated at conventions, like the majestic space duck, ghost Nappa, and the muffin button, but one of the main reason why I love the series is because of how faithful the parody is to the original Dragon Ball Z. Scrolling through the comments section to the episodes of Dragon Ball Z Abridged, I see a lot of people enjoy how the show not only makes fun of the absurdity of the original series but also helps viewers relive their childhood.

Son Goku was never a genius in the original Dragon Ball Z, but Team Four Star made Goku into an orange hillbilly who can only think about food and fighting. Vegeta goes from being the sinister prince of all Saiyans, to just a complete jerk. But Team Four Star also cuts through all the filler and keeps all of the feeling when retelling the battle between Goku and Frieza, or with the latest episode, the fight between Gohan and Perfect Cell.

As someone who didn't grow up with Dragon Ball Z, Team Four Star's abridged series is so entertaining, that I want to jump into the original series. I'm currently reading the original Dragon Ball and Dragon Ball Z manga just so I can fall in love with a world that so many others already cherish.

So if you love Dragon Ball Z or if you want to watch a hilarious parody that cuts through all of filler to just get to the humor, heart, and action, you should watch Team Four Star's Dragon Ball Z Abridged. I'm already planning to rewatch it from the beginning and then just sit and wait for season four.