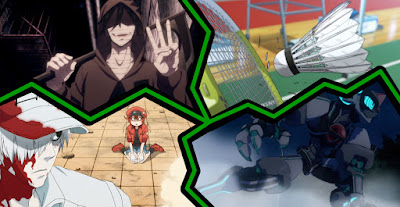 It can get pretty hot this summer, so why not stay inside where it's cool, enjoy a snow cone, and watch some (hopefully) quality anime.

I was quick to judge this last spring season of anime and assumed that there was really nothing good to watch when, in fact, there were actually plenty of good shows out there. To make up for that mistake, I'm trying out a wide array of shows this summer season and after watching a bunch of first, second, and third episodes, here are my first impressions of the summer anime season. 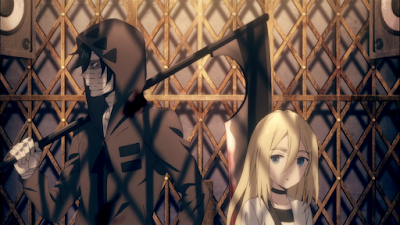 Angels of Death
I didn't think that such an edgy show could be so entertaining. After Rachel Gardener wakes up in an abandoned building, she can only escape by going through each floor, solving puzzles, and getting past dangerous killers. But Rachel doesn't really want to escape, she just wants to die, so the scythe-wielding Zack promises to kill her if she can help him escape the labyrinth of a building. Even though this show is really edgy and almost comically dark, it's a really fun show and I love how much of a contrast there is between Rachel and Zack's personalities. 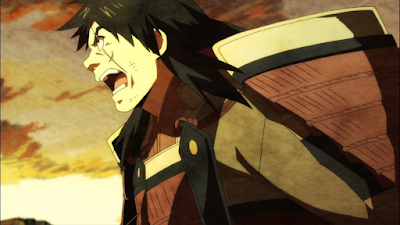 Angolmois: Record of Mongol Invasion
This is a historical anime about the first Mongol invasion of Japan. A group of exiles end up on Tsushima Island and have to help a princess and her army fight off the Mongols before they can invade Japan. After watching Golden Kamuy, I'm all for another historical anime, especially one with awesome fight scenes, but I have a feeling that I'm going to end up falling behind on this series despite that it has both history and awesome fight scenes. 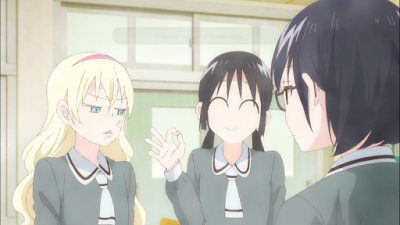 Asobi Asobase
My favorite comedy anime are Nichijou and Daily Lives of High School Boys, but at this point, I would not be surprised if Asobi Asobase becomes my new favorite by the end of this season. Not only does it have the same kind of exaggerated slice of life comedy of something like Nichijou, but instead of being cute and colorful, Asobi Asobase isn't as vibrant and the girls can be frighteningly ugly. I guess that I would describe it as cross between the rudeness of Pop Team Epic and the comedy style of Nichijou. 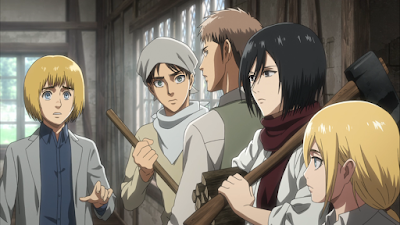 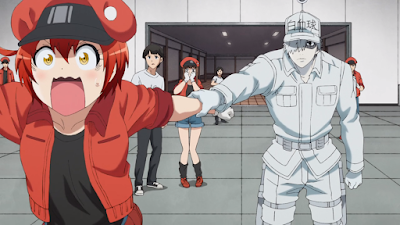 Cells at Work
Not only is this a comedy about the daily lives of cells in the human body, but it is actually kind of educational. I wouldn't say that Cells at Work is a replacement for a biology lecture, but it is like going through a college student's bio notes. And if you're not interested in learning about how the human body works, you can still enjoy the antics of a rookie red blood cell, an intense white blood cell, and adorable loli platelets. 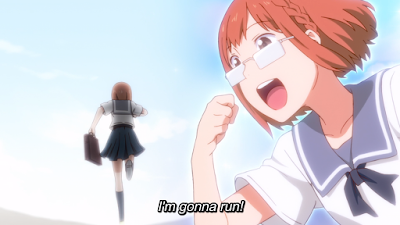 Chio's School Road
This is another comedy that I'm just loving. Chio is a nerdy gamer who stays up late and ends up having to rush to school in order to show up on time. On her way to school, she ends up in very strange and random situations, like she has to use ninja skills to climb rooftops and run to school, or she ends up encountering a gangster and convinces him that she's a dangerous killer called Bloody Butterfly. I am definitely going to be following Chio's School Road this season, hoping that it can keep the walk to school joke going until the end of the season. 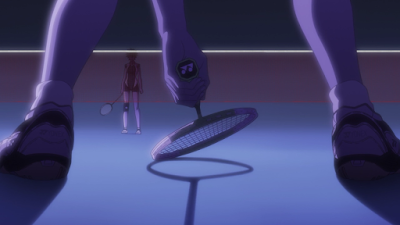 Hanebado!
I don't watch a lot of sports anime, but I think after watching Megalobox, I've become more open to sports anime and following passionate characters compete to be the best in their sport. Hanebado! is a badminton anime and has a lot of drama with great animation, so I'm already loving it. My only fear is that with so many character introduced in this series, the anime won't be able to develop all of the characters and give them time in the spotlight. 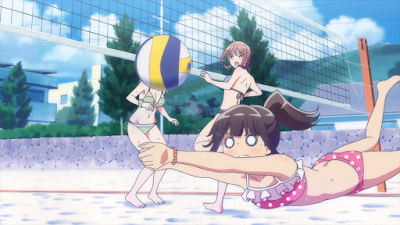 Harukana Receive
Another sports anime, but I started this anime for different reasons. I gave Hanebado! a chance because I wanted another sports anime, and I gave Harukana Receive a chance because I wanted to see cute girls doing cute things. Harukana Receive delivered on that, but it also seems to have a lot of drama, especially when it comes to the character of Kanata and her history with playing beach volleyball. This anime is fun and I'm hoping that it proves to be a great sports anime, though I would happily accept it if it just ends up being an anime about cute girls playing beach volleyball and nothing else. 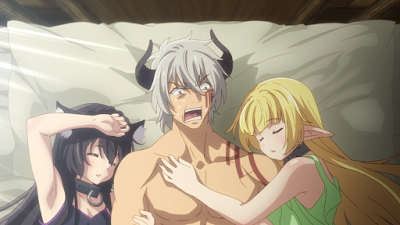 How not to Summon a Demon Lord
This is a comedy anime about a gamer who ends up as a demon lord summoned to a fantasy world by a cat girl and an elf. How not to Summon a Demon Lord reminds me of Konosuba in that way that it is a parody of the isekai genre, and I think it's pretty funny with some fun characters. I don't know if I'll follow it as religiously as I will Asobi Asobase or Chio's School Road, but I am definitely going to be watching it every now and then. 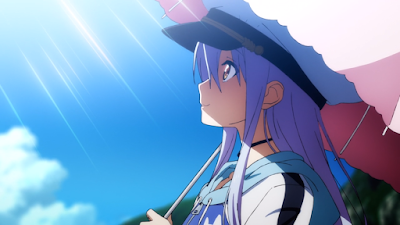 Island
I wanted to like Island. I gave it more chances than I should have because I really thought that it might end up being something great, but after four episodes, I don't see why I should spend my time watching a show about a time traveler surround by lolis. As cute as the girls are, I am really not following the story and whenever I watched an episode, I would usually end up scrolling through twitter on my phone or thinking about how I could be watching something better. 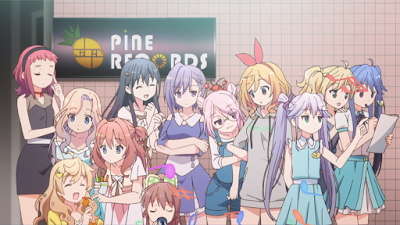 Music Girls
I think that Music Girls is alright. It's about a girl, Hanako, who ends up part of an idol group called Ongaku Shoujo, but not as a member of the idol group. Hanako becomes part of the staff that helps promote and support the idol girls. I kinda like that twist. I don't think that Music Girls will be as iconic as Idolmaster or Love Live, but it's the kind of moe trash that I love, and after watching Comic Girls, why not watch Music Girls. 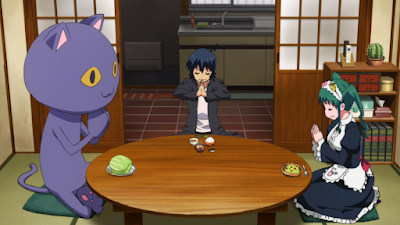 Planet With
A giant cat thing, an alien boy, and a maid, versus a team of superheroes piloting animal robots. It seems like a lot of random things just thrown together, but I think that this series has a lot of potential to be a great anime. Already it's fun with plenty of action, but Planet With is also showing that it might have a lot of heart and get really deep. I'm ready for the feels but I don't want to be let down by this mecha anime like I was with Darling in the Franxx. 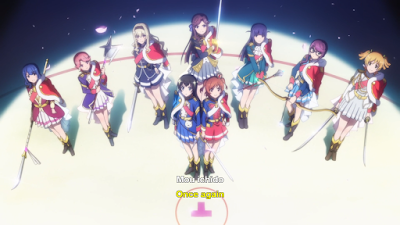 Revue Starlight
The action and animation in this series is great. Revue Starlight is about girls singing and fighting with swords, bows and arrows, and spears, to become the lead in a stage show while a talking giraffe judges their performance. This is definitely one of those shows where you think, "Only in anime" and I love it. I think if I don't end up following this series, watching the first episode is still an experience that I'm glad I had and would recommend people check it out. 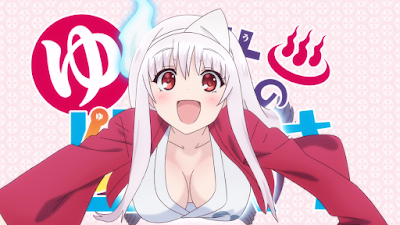 Yuuna and the Haunted Hot Springs
I like ecchi anime, but I also like my ecchi anime to have more that just boobs and butts. Usually I like ecchi anime that comes with comedy or drama, but Yuuna and the Haunted Hot Springs really doesn't have any of that and I'm probably going to end up dropping it. This anime is about Kogarashi, an exorcist, who ends up staying at a cheap boarding house that is haunted by a ghost girl, Yuuna, and other monster and demon girls. Of course, there is some comedy, but it seems like it's the usual cliche "Guy falls on top of girl and creates some kind of misunderstanding" and that gets old fast. It kind of reminds me of Monster Musume, which is another anime that I started and ended up abandoning after a couple episodes.

So that's all that I'm watching this season. Let me know what you're watching and what you think of the summer season so far by commenting either below, or on Facebook, Twitter, or Instagram. If there is anything that I'm not watching that you think is worth checking out, let me know.
Posted by AJ at 12:00 PM