Why You Should Watch "Little Witch Academia" 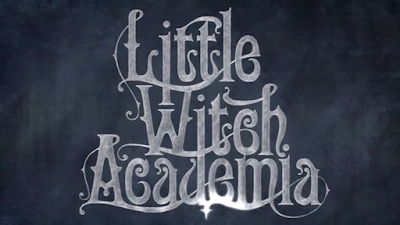 It's Halloween next week and already people are getting in the mood for Jack O' Lanterns and Monsters with horror movie marathons and shopping for the scariest costumes. But for those who have had enough of the Halloween terror, why not check something out that's a little more light-hearted and fun. Instead of watching a movie about serial killers and demons, why not watch an anime about magical witches. 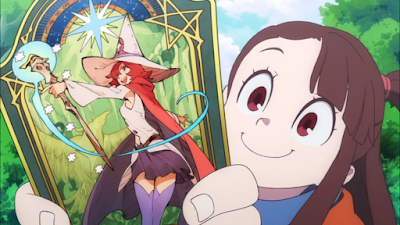 No, not the stereotypical evil witches with green skin, sinister cackles, and wart covered faces, but witches that use their magical powers to help others and make people smile. Little Witch Academia is about Atsuko Kagari, Akko, and her journey to become a famous witch like her childhood idol, Shiny Chariot.

The story begins when Akko enrolls at Luna Nova Magical Academy to learn how to be a witch like Shiny Chariot. However, unlike the rest of the student body, Akko does not come from a witch family and has almost no experience with magic and witches. Akko has an uphill battle to prove herself at the academy, failing most of the time, but she doesn't give up, especially with the help of her friends. 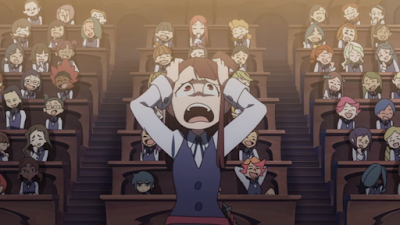 Akko is not perfect, in fact, she is far from perfect. She has dreams and works hard to achieve those dreams, but Akko almost always fails and embarrasses herself in the process. And that is why Akko is such an endearing character, because even though she is always losing, she doesn't give up and will fight on to achieve her dream, no matter how impossible.

Even is Akko isn't the best student at Luna Nova Academy, she is definitely the friendliest student with the most passion for magic. She is ready to become friends with anyone, even students who give her a hardtime *cough* Sucy *cough*. Akko is willing to to do whatever it takes to help others, her friends and peers, fairies, and even fish. 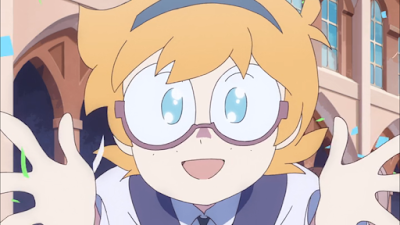 But Akko wouldn't have a very pleasant time at Luna Nova Academy if not for her two best friends, Lotte Jansson and Sucy Manbavaran. Lotte may be quiet and a little bit timid, but she makes up for it with her large heart and quick thinking. Akko has good intentions, but her impulsiveness leads to a lot of bad luck, fortunately Lotte is there to help Akko think things through and look at a situation from several angles.

Lotte may be reserved, but that doesn't mean she is cold or passionless. Lotte cares a lot for her friends, and even though she is unsure of most of Akko's plans, Lotte still does everything she can to help. And like how Akko is on fire for Shiny Chariot, Lotte is a huge fan for her favorite book series Night Fall, and was just as reckless as Akko is on a daily basis to go to a convention and meet the writer of Night Fall. 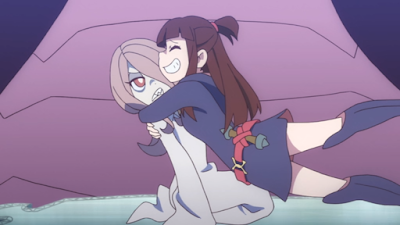 Sucy is another of Akko's friend, but is not as helpful as Lotte and is a little more of an antagonist to Akko, constantly trolling her. Sucy is constantly messing with Akko and putting her down, using her magic potions for the sole purpose of getting on Akko's nerves. When the two first met, Sucy brought one of Akko's stuffed birds to life and it ended up poking Akko's eyes out.

But even though Sucy can be a bit tough to love, she is still willing to go along with Akko on her adventures and uses her knowledge of potions and mushrooms to help...or make things worse. Basically, Sucy is that one friend who gets joy out of Akko's failures, but will pull through when Akko needs help. 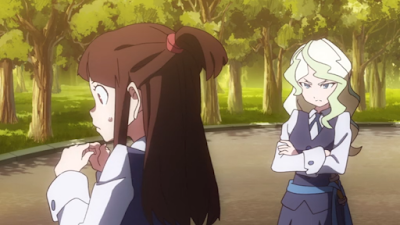 Akko's friendliness isn't welcomed by everyone at Luna Nova Academy, including star student Diana Cavendish. Diana comes from an ancient and well-known family of witches and her magical talents live up to her family reputation. While Akko is animated and spontaneous, Diana is cool and studious, and she succeeds almost as much as Akko fails.

Akko sees Diana as her rival at Luna Nova Academy, but honestly, Akko isn't skilled enough to rival Diana's status at the school, and all of the students know it, including Diana. When Akko first arrives at the academy, Diana thinks that Akko is foolish and not serious about magic, but as the series progresses, Diana starts to recognize Akko's passion to become a great witch and develops admiration for her. 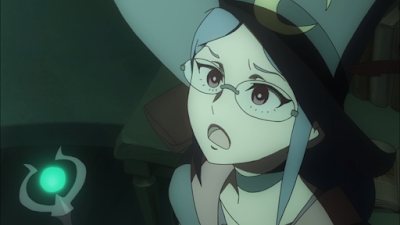 At Luna Nova Academy, most of the teaches look at Akko with disappointment and are just waiting for her to drop out, except for Professor Ursula. She is a mentor to Akko, taking the time to help Akko grow as a witch and develop her magical abilities. Even though Professor Ursula is timid and nervous, she is ready to defend Akko from the other professors at the academy.

But why? Why does Professor Ursula care about Akko so much? Well, I'm not going to spoil anything, but I will say that Professor Ursula has some mysterious connection and resemblance to Akko's childhood hero Shiny Chariot. 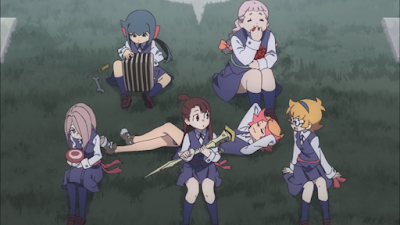 Those are the main characters of Little Witch Academia, but now it's time to move onto the actual story structure of the series. While there is a storyline that plays out throughout the series, Little Witch Academia is more episodic than linear. You can pretty much watch any episode from the first season and you can still enjoy yourself without being confused. 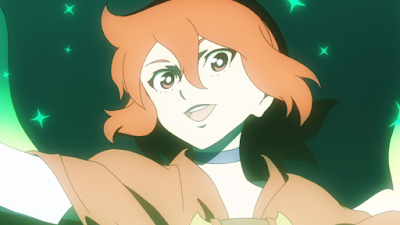 Whenever the witches use magic, those scenes are always vibrant and smoothly animated. I think the first scene showing Shiny Chariot's magic show is a perfect example of Little Witch Academia's animation. After watching it, you'll understand why Akko is so amazed by Shiny Chariot and in love with the world of magic. 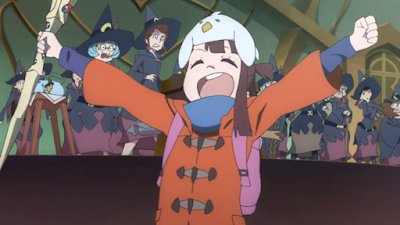