The Kingslayer and The Chosen One 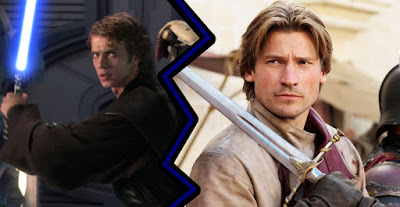 The Jedi knight and the anointed knight. The similarities and differences between these two characters are striking!

The seventh season of Game of Thrones ended awhile back and watching clips on YouTube only can do so much to fill the hole the realm of Westeros has left in my heart. Luckily I am a geek with many interests to keep me preoccupied, for example, Star Wars: The Last Jedi is coming out in a couple months and I am excited. I'm hearing a lot of good things from the cast and crew, and the images that have been released look amazing.

But being in this weird time of waiting for a new Star Wars movie and having just finished a season of Game of Thrones have gotten me thinking about a lot of similarities between the two worlds of fiction and their characters. I mean, I doubt I am the first to make these connections, especially since both Star Wars and Game of Thrones are both fantasies with huge worlds with complicated characters and a rich history. What sets these stories apart is that Game of Thrones fits more into the Sword and Sorcery genre of fantasy while Star Wars belongs to the Sci-Fi genre.

And yet, I couldn't stop thinking about the two characters, Jaime Lannister and Anakin Skywalker, and how similar they are to one another, and how even their differences seemed significant. Before writing this post, I googled "Anakin Skywalker and Jaime Lannister" to see what other kinds of posts and articles have been written comparing these two characters, and surprisingly, I didn't find much. So it is now up to me to connect the dots, draw parallels, and convince you of some kind of conspiracy devised by George Lucas and George R.R. Martin.

Quick disclaimer, there will be spoilers for Game of Thrones and Star Wars, so if you haven't finished watching the 7th season of Game of Thrones or watched the original Star Wars trilogy or the prequels, then I suggest you stop reading. Also, I have not read George R. R. Martins A Song of Ice and Fire, so if the Jaime Lannister of the books differs from the Jaime Lannister of the show, I would not know.

So...what how do Anakin Skywalker and Jaime Lannister compare? Well first off, their appearance is really similar. Both Jaime and Anakin are attractive and desirable to women. In some animated versions of Anakin Skywalker, his hair is a golden brown, making him resemble Jaime. But perhaps the most noticeable physical trait of these two characters is that they are both missing a hand.

Yes, both characters had their right hand cut off and ended up getting some kind of a prosthetic. Anakin's hand was cut off in a duel with Count Dooku, and had it replaced with a golden mechanical one, while Jaime's hand was cut off by a sell-sword named Locke and ended up replacing it with a gold prosthetic. And in a way, it was the arrogance of these characters that led to them losing their respective hand. Anakin overestimated his ability to take on Count Dooku and Jaime thought that he was clever enough to talk his way out of any situation. Both characters paid the cost for their foolishness.

Of course, I do not think that their appearance is what makes Anakin and Jaime so similar, but rather their actions and reputations. Anakin Skywalker is a Jedi knight known throughout the universe for his combat skills and his abilities as a star-fighter pilot. Jaime Lannister is an anointed knight and member of the king's guard, and like Anakin, is well known for his combat skills, especially his ability with a sword.

But despite their noble fame, these two characters are known more for their betrayl. Jaime betrayed the oath of the king's guard when he slew the mad King Aerys Targaryen. Though he did it to protect the innocent as well as his father, Tywin Lannister. Anakin betrayed the jedi council and turned to the dark side, taking the title Darth Vader and nearly wiped out the entire Jedi order.

However, Anakin and Jaime come from very different backgrounds. Anakin was born a slave on the desert planet of Tatooine while Jaime was born into a wealthy house from Casterly Rock. Anakin knew only hardship and poverty, but chose to live the life of a Jedi, protecting peace and order. Jaime was wealthy and had a highborn name, but he gave that up to become an anointed knight of the king's guard. Despite their different backgrounds, both characters chose to serve others rather than take what they wanted for themselves.

Yes, both Jaime and Anakin sacrificed in order to serve others and protect the innocent...but both made an error when they fell in love with people that they should have avoided. Anakin fell in love with Padme Amidala, a former queen and senator from the planet Naboo, even though the Jedi code forbade love and romance. Jaime fell in love with his twin sister, Cersei, and the couple entered an incestuous relationship, a relationship that constantly brought out the worst in Jaime.

Anakin's secret relationship with Padme made him susceptible to the dark side of the force and brought him under the influence of the Sith. For love, Anakin became Darth Vader and betrayed his fellow Jedi, committing unspeakable atrocities, including killing children.

Jaime's love for Cersei also led him down a dark path. His passionate and sinful relationship convinced Jaime to give up his inheritance to become a member of the king's guard. When caught with Cersei by the ten-year old Bran Stark, Jaime was willing to kill him to keep his relationship with Cersei a secret. 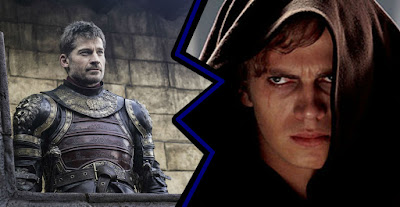 Both Anakin Skywalker and Jaime Lannister are noble protectors who were drawn to darkness because of the people they chose to love. But even though they chose to commit evil, Star Wars and Game of Thrones tell the story of these characters finding redemption. Anakin is later brought back from the dark side by his son, and Jaime is realizing that Cersei is just as mad as the king he slew.
Posted by AJ at 3:30 PM