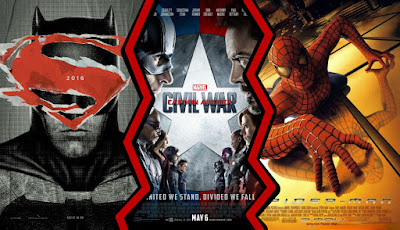 It's what we're all waiting for when we watch a superhero movie.

Over the past few years, the summer has been full of movies based off of comic book superheroes, and this is going to be a trend for the foreseeable future. Going into each movie, there are certain elements that we expect to see, like a colorful or detailed costume, cool super villains, and awesome special effects. Without intense battles or destructive explosions, it doesn’t feel like a superhero movie.

Even though a lot of these fight scenes are really over the top and just gratuitous fan service, there are still a lot of fight scenes which are vital to these movies and add emotion and story to the plot. Thinking about my favorite superhero movies, I’ve come up with a short list of fight scenes from these movies that showcase the powers and abilities of the characters and contain tension and emotion that keep the audience on the edge of their seats. This list is not in any particular order since each fight has some unique edge that makes it unfair to compare against another.

Now that there are so many superhero movies every year, it is easy to forget the movies that were pioneers of the genre and established many of the tropes and trends that today’s movies follow. One of those movies was Sam Raimi's Spider-Man.

Not only did Spider-Man inspire the story structure of several superhero movies that followed but also had one of the best fight scenes in the history of superhero movies. The final fight between Spider-Man and the Green Goblin isn't flashy with an epic music score or huge explosions. But that's what makes it so great!

It's a final fight that does a great job with building the tension as the Green Goblin pummels and beats a weak Spider-Man. The scene is dramatic and intense without any over-the-top special effects and the drama isn't undercut with any quips or funny one-liners. Spider-Man includes the kind of fight scene that we don't see to often in today's superhero movies.

Batman and the Warehouse Massacre

Many superhero and comic book fans have mixed opinions regarding Batman v. Superman: Dawn of Justice. However, I think that one thing that all fans agree on is that the warehouse fight scene was awesome!


I like a lot of the previous Batman films but Batman v. Superman gave fans a look at the Batman fighting a group of criminals with the swiftness and skill that we've always seen in the comic books. Of course, comic books are just drawings that don't move, so readers always have to just imagine Batman's athletic prowess and Batman v. Superman brought that to life. Batman fought with a combination of brute strength and graceful movements that would definitely terrify a group of criminals.

I also wanted to highlight this scene because there are very few fight scenes involving a hero and a mob of characters that is this impressive. The only other one that comes to mind is the hallway scene from Netflix's Daredevil which I might talk about in a future post.

Cap versus the Tin Man

I can probably write an entire essay criticizing Captain America: Civil War, but I have to give credit where credit is due. The final fight between Captain America and Iron Man was not only a proper climax but a beautiful homage to the original comic book.


First off, I am not highlighting the entire fight between Captain America and Bucky versus Iron Man, since I have some personal qualms against it and because I think the fight between Cap and Iron Man is more iconic and has more meaning.

In previous MCU films, fans have gotten to see Captain America and Iron Man work together and fight side-by-side, and in Civil War their circumstances and connection to Bucky Barnes has them fighting, seemingly to the death. Cap is fighting to protect his childhood friend while Iron Man wants revenge against his parents' killer. Not only is the fight this emotional climax that could end in the death of either character but it perfectly brings to life many of the images of the Civil War comic book storyline.


Now, there are many other noteworthy fight scenes from superhero movies but these are the ones that immediately came to mind when I thought about the subject. Maybe in a future post I'll honor some other impressive fight scenes. For now, let me know in the comments what fight scenes you were blown away by.