Should You Watch The Live-Action "Fullmetal Alchemist" Movie? 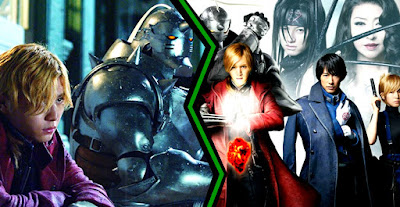 Does this live-action film live up to the classic manga and anime series?

Most people cringe when they hear the words "live-action anime adaptation" and I cannot say that those words make me think I'm going to get a work of art like The Godfather or Titanic. Hollywood has failed many times to create a decent live-action anime adaptation, looking at Dragon Ball Evolution and Death Note as notable examples, and it doesn't seem that Japan has had much luck, looking at the live-action Attack on Titan.

Last year, Japan came out with their live action adaptation of Fullmetal Alchemist, a classic anime that many otaku consider to be a masterpiece, and it is now airing on Netflix for American audiences to enjoy. So...did a film studio finally succeed in creating a decent live-action anime adaptation? My answer to that is...kinda...

Fullmetal Alchemist: Brotherhood is considered to be one of the greatest anime in existence and is currently the top anime series on MyAnimeList. It has some of the most memorable anime characters and one of the most complex and meaningful stories. To translate the 60+ episode anime into a two-hour movie would be a challenge for anyone and I think that the director and crew of the live-action adaptation did a decent job.

The live-action adaptation succeeded in recreating some of the most iconic scenes from the anime as well as the designs of the characters. While watching the live-action, there were moments that when I was hit by waves of nostalgia and I relived the time that I first witnessed the tragedy of Nina and Alexander and experienced the brotherly love of Edward and Alphonse Elric. I really enjoyed the trip down memory lane that the live-action gave me, especially since Fullmetal Alchemist was one of my first anime series.

HOWEVER...I doubt that someone who has never seen Fullmetal Alchemist will be able to enjoy the live-action movie to the extant that I did. I think that someone new to the world of Fullmetal Alchemist will be lost and have a lot of questions, especially since the movie moves through the original story really fast and has to sacrifice a lot of the plot points and characters to save time. If I did not watch the original series, I do not think that a lot of the moments from the movie would have as much of an impact and would just fall flat.

I'm also a little upset that a lot of my favorite characters were cut from this movie. Scar, Greed, Izumi Curtis, and ALEX LOUIS ARMSTRONG!! One of the great things about Fullmetal Alchemist: Brotherhood is that so many of the characters are fleshed out and made to feel real, and even the ones that aren't fleshed out are still fun and awesome.