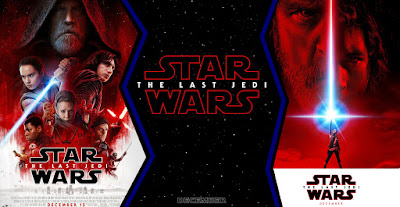 Is it the greatest Star Wars movie of all time? Should it be removed from the Star Wars canon? Here's what I think...

I really liked Star Wars: The Last Jedi. But why did I like it? Well, to answer that question, I need to explain my thoughts and feelings about Star Wars: The Force Awakens.

Back when The Force Awakens, I was excited like a lot of Star Wars fans, if not a little disappointed that this new upcoming trilogy would erase the old Star Wars extended universe. But after watching The Force Awakens, even though I thought it was a good movie, I was a little disappointed. It seemed like Director J.J. Abrams was trying to play it safe and ended up remaking A New Hope.

Even thought the Star Wars prequels get a lot of hate, I think they deserve some respect for trying to be different from the original trilogy. I liked that George Lucas was willing to explore new worlds and aspects of the universe that he created, even though it could be a little silly or shocking. George Lucas wanted to have fun with his creation and didn't let haters stop him.

The Force Awakens' main character from a desert planet, a weapon that can destroy planets, and an astronomer droid that had important information to a group of rebels, were all reminiscent of A New Hope. But I did like the new cast of characters. I became heavily invested in the lives and adventures of characters like Finn, Rey, and Kylo Ren. Even thought I was afraid that The Last Jedi would just be a remake of The Empire Strikes Back, I was interested in seeing what would happen to these new characters.

I was not disappointed.

Even though the movie has been out for a few weeks, I will not reveal any major spoilers for The Last Jedi. I will just say that I was really happy in seeing the direction that Director Rian Johnson took these new characters, especially Rey and Kylo Ren. I also like the respect that Johnson showed old characters, like Leia Organa and Luke Skywalker. The Last Jedi felt like a conclusion to the story of a lot of these characters, but to know that there is one chapter left to tell, I am excited to see what happens next to these characters.


I also liked how Rian Johnson was willing to take risks, like George Lucas, and explore more aspects of this universe that he haven't seen before in other Star Wars movies. It is obvious that Johnson fell in love with these worlds and was willing to make his own mark on this mythology. After watching The Last Jedi, I am a little disappointed to know that Rian Johnson won't be directing Episode IX.

I know that The Last Jedi has caused a lot of division in the Star Wars community, like most things do, but I think that this is just another example of how fans love these stories and characters, and defending them from any possible threat. Hopefully, as time goes on fans come together and respect the opinions of one another and see The Last Jedi as an acceptable addition to the Star Wars universe.